Items related to The Road to Somewhere: The Populist Revolt and the...

David Goodhart The Road to Somewhere: The Populist Revolt and the Future of Politics

The Road to Somewhere: The Populist Revolt and the Future of Politics 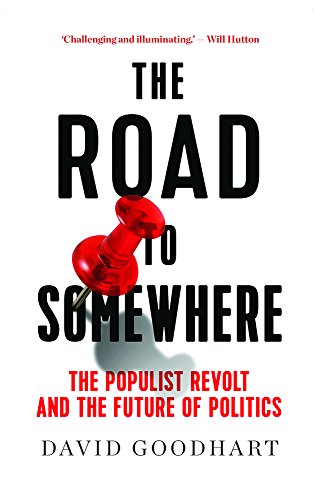 ***THE SUNDAY TIMES TOP TEN BESTSELLER*** A robust and timely investigation into the political and moral fault-lines that divide Brexit Britain and how a new settlement may be achieved. Several decades of greater economic and cultural openness in the West have not benefited all our citizens. Among those who have been left behind, a populist politics of culture and identity has successfully challenged the traditional politics of Left and Right, creating a new division: between the mobile 'achieved' identity of the people from Anywhere, and the marginalised, roots-based identity of the people from Somewhere. This schism accounts for the Brexit vote, the election of Donald Trump, the decline of the centre-left, and the rise of populism across Europe. David Goodhart's compelling investigation of the new global politics reveals how the Somewhere backlash is a democratic response to the dominance of Anywhere interests, in everything from mass higher education to mass immigration.

'Goodhart offers an impeccably sensible and decent exposition of how the political elites have failed their societies ... The book makes compelling reading both for voters and those who want to get elected by them.' --Max Hastings, The Sunday Times

'[Goodhart] has written a book that is thoughtful, well argued and dangerously moderate. It may even be an incitement to independent thinking.' --The Times

'[A] provocative take on the UK's new tribal divisions ... And it broadly works ... The Road to Somewhere has the feel of a book whose timing ... is pitch-perfect.' -- Andrew Marr, New Statesman

'Goodhart's exploration of this underlying divide -- and the question of what might be done -- is not only timely but also offers an accessible, evidence-based and direct account of how these conflicts are reshaping the political world around us.' -- Matthew Goodwin, Financial Times'Whatever other objections Goodhart's new book might provoke, few could call it irrelevant or untimely ... he returns to this most vexed terrain, picking his way through nettles and thorns that might deter thinner-skinned writers.' -- Jonathan Freedland, The Guardian'Goodhart has clarity of argument and courage. He has been making these points for a decade and urging the mainstream to engage with them. He does not do fads.' -- The Observer'[Goodhart] has written what may turn out to be the most sympathetic and insightful book about Britain's discontented masses.' -- Toby Young, The Spectator'Mr Goodhart's book seems likely to inform the debate on what post-Brexit Britain should look like.' -- The Economist'This meticulously researched book ... enables us to imagine Brexit as a moment that could just prove to be the start of a national renewal.' -- Prospect'Challenging and illuminating.' -- Will Hutton'David Goodhart offers the best and most complete explanation I've seen for why things seem to be coming apart in so many countries at the same time.' --Jonathan Haidt, author of 'The Righteous Mind' From the Author:

David Goodhart is the founding editor of Prospect magazine and one of the most distinctive voices on British politics today. He is currently head of the Demography, Immigration and Integration Unit at the think tank Policy Exchange, and was previously director of the centre-left think tank Demos. His last book The British Dream: Successes and Failures of Post-War Immigration (2013) was runner-up for the Orwell Prize in 2014 and was a finalist for 'Political Book of the Year' in the Paddy Power Political Book Awards.

1. The Road to Somewhere: The Populist Revolt and the Future of Politics

2. The Road to Somewhere: The Populist Revolt and the Future of Politics