Items related to Petra and the Lost Kingdom of the Nabataeans

Jane Taylor Petra and the Lost Kingdom of the Nabataeans

Petra and the Lost Kingdom of the Nabataeans 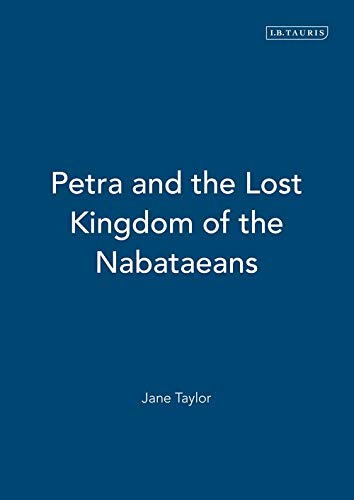 The Nabataean Arabs, one of the most gifted peoples of the ancient world, are today known only for their hauntingly beautiful rock-carved capital - Petra, a magnificent city carved out of the mountains, and one of the most breath-taking achievements of the ancient world. Yet they were famous in their day - Herod the Great and his sons, and a kaleidoscope of Roman emperors and generals were keenly aware of this powerful and wealthy trading kingdom. The Nabateans became inspired patrons of the arts, creating some of the most sublime and perfectly individual architecture of the time, not only at Petra, but over much of the Middle East. This richly illustrated book recounts the story of a remarkable but lost civilization. It tells of their nomadic origins, the development of their rich culture in Jordan, Syria, Arabia, Sinai and the Negev, their relations with their more famous neighbours and the demise of their kingdom at the hands of the Romans.

An excellent book for the intelligent reader seeking an introduction to this field. The author, a writer and photographer, has done a fine job, reflecting her love of the subject matter... both text and photographs - of high quality and artistic spirit - portray the recent state of affairs and acquaintance with a variety of opinions...The book will serve well its purpose to promote updated knowledge of a fascinating ancient Arab culture beyond the limited circle of professional scholars. --Bryn Mawr Classical Review

A vibrant narrative and photographic history... The story is seductive: lavish illustrations of spectacular monuments combine with fluid writing. . . The stunning photographs are simply not to be missed. . .The images float within her text, enhancing the lavishness of the prose. --Journal of the Society of Architectural Historians

I have very much enjoyed Jane Taylor s book on the Nabataeans. She writes marvellously for her audience. She has complete command of her material and obviously loves it. I was deeply impressed by reading the book. --Professor Glen Bowersock, Institute for Advanced Study, Princeton

After a degree in Medieval History and Moral Philosophy from St Andrews University in Scotland, Jane Taylor has been a teacher, publisher, television producer, photographer and writer. First coming to Jordan in 1978, she started visiting regularly from 1984 onwards. The chance to do some aerial photography led to her first Jordan book, High above Jordan, published in 1989, since when she has made Amman her home. Her other books are Testament to the Bushmen (with Laurens van der Post, 1984); Imperial Istanbul, an historical travel guide (1989, revised editions 1998, 2007); Petra, an illustrated history of the Nabataean capital (1993; revised editions 1996, 2005, 2008); Petra and the Lost Kingdom of the Nabataeans, an illustrated history of the Nabataeans (2001, revised editions 2007, 2012); Jordan, Images from the Air (2005); and Beyond the Jordan: Baptism, Prophecy and Pilgrimage East of the River Jordan (with Isabelle Ruben, 2011). She also co-produced Yemen: Land and People, with her photographs and text by Sarah Searight (2002, revised edition 2007)..

1. Petra and the Lost Kingdom of the Nabataeans

2. Petra and the Lost Kingdom of the Nabataeans