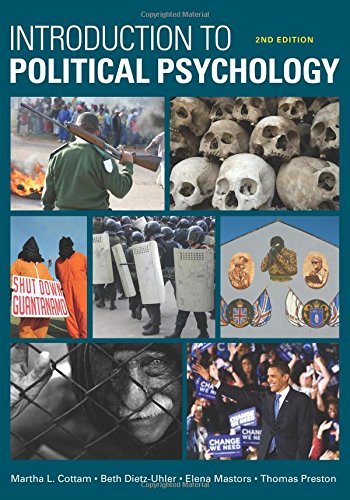 This comprehensive, user-friendly introductory textbook to political psychology explores the psychological origins of political behavior. The authors introduce readers to a broad range of theories, concepts, and case studies of political activity to illustrate that behavior. The book examines many patterns of political behaviors, including leadership, group behavior, voting, race, ethnicity, nationalism, terrorism, war, and genocide. It explores some of the most horrific things people do to one another for political purposes, as well as how to prevent and resolve conflict -- and how to recover from it. The goal is to help the reader understand the enormous complexity of human behavior and the significant role political psychology can play in improving the human condition.

The book contains numerous pedagogical features, including text boxes highlighting current and historical events to help students see the connection between the world around them and the concepts they are learning. Different research methodologies used in the discipline are employed, such as experimentation and content analysis. The "Political Being" is used throughout to remind the reader of the psychological theories and concepts to be explored in each chapter.

New to the second edition is coverage of recent political events, including the 2008 US presidential election, Darfur, Iraq, and Afghanistan. There are now separate chapters on race, ethnic conflicts, terrorism, and conflict resolution. In addition, instructor resources are available online.

This accessible and engaging introductory textbook is suitable as a primary text on a range of upper-level courses in political psychology, political behavior, and related fields, including policymaking.

Martha L. Cottam is Professor of Political Science and Director of the Washington State University Institute for the Study of Intercommunal conflict. She received her Ph.D. from UCLA in 1983. Her research interests include decision-making in American foreign policy, US and Latin American relations, and many topics related to political violence.

Beth Dietz-Uhler received her Ph.D. in social psychology from the University of Pittsburgh in 1994. Her research interests include group identity, computer-supported interaction, and sport fans and spectators. She also has a strong interest in distance education and the use of technology in teaching and learning.

Elena Mastors is currently an Associate Professor in the National Decision Making Department at the Naval War College. Previously, she held various senior intelligence and policy positions in the office of Undersecretary of Defense for Intelligence and the Defense Intelligence Agency. She received her Ph.D. in Political Science from Washington State University. She is a specialist in leadership, group dynamics, conflict and terrorism.