Items related to Written on the Heart (Nick Hern Books) 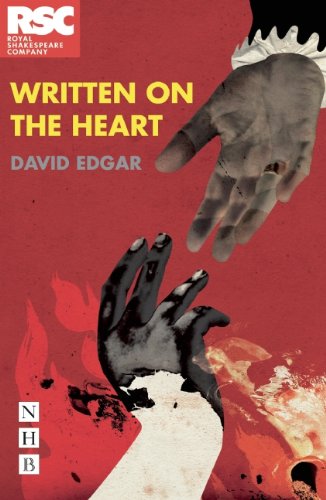 Marking the four-hundredth anniversary of the King James Bible, David Edgar's Written on the Heart tells the dramatic story of the translation of God's Word into English. For one man, this endeavour leads to death at the stake. For another, it could mean an archbishop's mitre.

After almost a century of unrest, the King James Bible was intended to end the violent upheavals of the English Reformation. But deep seated discord forces a leading translator to confront the betrayal of his youthful religious ideals, for the sake of social piece.

David Edgar's enthralling historical drama was commissioned by the Royal Shakespeare Company and premiered at the Swan Theatre, Stratford-upon-Avon, in 2011.

David Edgar's new play (about The King James Bible), Written on the Heart, is the most bracing and radical attempt so far to construe this masterpiece not just as an object of aesthetic veneration or historical significance but as a document that reflects the prejudices and preoccupations of its period. Premiered in Gregory Doran's powerfully involving and pungently acted production, the piece brings the Reformation and its ideological conflicts stingingly alive. --Independent

A learned, information-packed and engrossing play that sees the Authorised Version in its historical context. Like Howard Brenton in Anne Boleyn, Edgar also finds a hero in the outlawed William Tyndale, whose mission was to translate the scriptures into a readily understandable vernacular... in writing about religion, Edgar has acquired a new eloquence. --Guardian

Reckless faith, literary taste and political expediency collide and swirl in a tough, nourishing play... the Royal Shakespeare Company at its best: fine actors, swimming in great words and ideas. --The Times

David Edgar has written extensively for the RSC, with other works including Destiny, Pentecost, The Prisoner's Dilemma and his hugely successful Nicholas Nickleby. Other plays include The Shape of the Table, Continental Divide, Albert Speer, and Playing With Fire. He has also adapted Ibsen's the Master Builder and Julian Barnes Arthur & George. He is the author of the best selling How Plays Work - a masterclass for playwrights and playmakers.

2. Written on the Heart