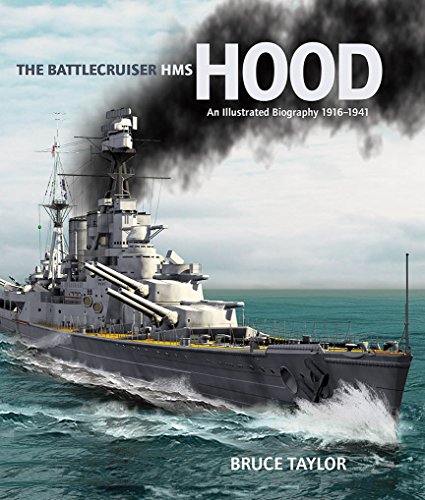 The battlecruiser HMS Hood is one of the great warships of history. Unmatched for beauty and charisma, unequalled for size, for 20 years the she was the glory ship of the Royal Navy, flying the flag across the world in the twilight years of the British Empire. Here, in words, photos and colour artwork, is the story of her life, her work and her people, from the laying of her keel on the Clyde in 1916 to her awful destruction at the hands of the Bismarck in 1941. Among the eyecatching strengths of the book is a unique gallery of photographs, including stills from a recently discovered piece of colour footage of the ship, plus a spectacular set of computer-generated images of both the exterior and interior by the worlds leading exponent of the art - a man who worked with the film director James Cameron (of Titanic fame). A wealth of new information on Hoods structure and operation make it essential reading for the enthusiast, modeller and historian alike. Hugely successful from its first publication, this is the forth printing of the ultimate book on the ultimate ship of the pre-war era, and is now presented in a new, smaller and affordable softback format.

BRUCE TAYLOR was born in Chile in 1967 and educated at the University of Manchester and at Oxford where he received a doctorate in Modern History in 1996. The book represents more than five years research and has achieved the status of classic. He is also the co-auther of U-Boat Attack Logs, another major reference book, published by Seaforth in 2011.

Book Description Paperback. Condition: New. Schmid, Thomas (illustrator). Illustrated. Language: English. Brand new Book. Representing five years of research, The Battlecruiser HMS Hood is easily the most comprehensive book ever published on this great warship. Bruce Taylor shares her entire story - from the laying of her keel on the Clyde to her destruction by the Bismarck - in words, photos, and color artwork. The unique assortment of photos assembled in this book includes stills from a recently discovered piece of color footage. Thomas Schmid presents readers the opportunity to further explore and admire the Hood with his digitally created images of the exterior and interior of the ship. The new information on the Hood's operation and structure make this book essential reading for any enthusiast, modeler, or historian. Seller Inventory # AAC9781848322486