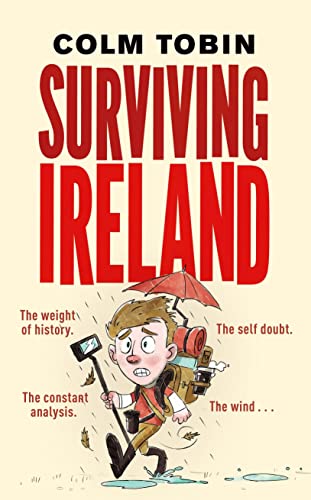 It’s exhausting, being Irish. The constant self-flagellation is enough to put anybody off their breakfast.
Why are we so hard on ourselves? Is it the post-colonial overhang following centuries of oppression at the hands of a litany of foreign invaders? Or is it collective guilt for sending Westlife out into the wider world?
In Surviving Ireland, acclaimed comedy writer Colm Tobin* takes the reader by the hand for a satirical romp through modern Irish life. As well as providing all the tools you’ll need to navigate this often tricky little island (except a compass or anything even resembling a fact), the book will take you through some of the country’s fraught history, asking some searing questions in the process: how did we get here, where are we going and who in the name of God is going to pay for it all?
Surviving Ireland takes in culture and politics, town and country, food and drink, birth, death and everything in between. Let it be your definitive guide to this strange and bewildering rock, cowering from the cold Atlantic swells. Oh, and it’s got some funny drawings in it as well.
* Not the Booker Prize-nominated author Colm Tóibín.

A brilliant and scathing look at Ireland by top comedy writer Colm Tobin.

Colm Tobin is an acclaimed comedy writer and TV producer with Kite Entertainment. He has almost 50,000 followers on Twitter. As well as writing for RTE Radio 1's Irish Pictorial Weekly, he has written and produced the children's science shows Science Fiction for RTE JNR and CBBC, and Brain Freeze for CBBC. He also wrote and produced the satirical RTE TV series Langerland, and has written pieces for The Irish Times. Originally from Clonakilty, West Cork, Colm now lives in Dublin.