Items related to So, Anyway...: The Autobiography

John Cleese So, Anyway...: The Autobiography

So, Anyway...: The Autobiography 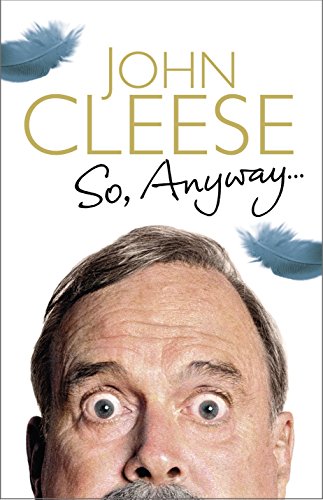 Despite having apparently no talent for singing or dancing, John Cleese joined the Footlights club when he took up his place at Cambridge in 1960. Among his contemporaries were Bill Oddie, Tim Brooke-Taylor, and Graham Chapman with whom he would go on to form Monty Python. This autobiography describes the comedian's life and influences from his childhood and time as a teacher at his old prep school to his success as a scriptwriter, comedian and ultimately film star.

"Vivid, ridiculously entertaining, and, at times, explosively funny... Cleese is a master of crisp comic prose: his elegant syntax and sudden absurdities would have PG Wodehouse raising a martini glass. So, Anyway... glows with fairness, kindness, gentleness and loyalty." (Nicholas Barber Sunday Express)

"Told with considerable charm and a refreshing amount of candour, the story is one of a vulnerable soul gradually finding a degree of security from behind a carapace of cutting wit... Remarkably warm and generous." (Graham McCann Times Literary Supplement)

"John Cleese’s memoir is just about everything one would expect of its author – smart, thoughtful, provocative and above all funny... A picture, if you will, of the artist as a young man." (Washington Post)

"So, Anyway... breaks away from the shallow conventions of the famous person's autobiography... The result is a book that is frequently hilarious, occasionally lyrical and always thoughtful. It is a fine and funny achievement." (Herald)

"Like having a long lunch with an amiable, slightly loony uncle. Who also happens to be John Cleese." (Michael Ian Black New York Times)

The autobiography of a comedy giant.

Book Description Hardcover. Condition: New. Dust Jacket Condition: New. 1st Edition. John Cleese-So, Anyway.: The Autobiography 1st 1st Signed NEW will be sent boxed and via a signed for method of postage Extra postage will be needed for overseas orders if the weight exceeds one kilo book is signed without dedication unless stated otherwise. All books come with a lifetime guarantee No Coa's issued unless the book originally came with one then it will be included with the book. Signed by Author. Seller Inventory # ABE-1557759238720