Items related to Spillover: Animal Infections and the Next Human Pandemic

David Quammen Spillover: Animal Infections and the Next Human Pandemic

Spillover: Animal Infections and the Next Human Pandemic 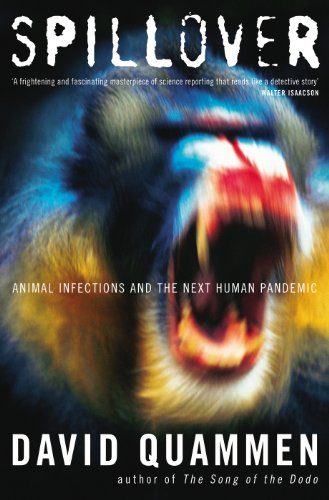 First, a horse in Brisbane falls ill: fever, swelling, bloody froth. Then thirteen others perish. The foreman at the stables becomes ill and the trainer dies. What is going on?

It takes months to establish that the cause is a virus which has travelled from a tree-dwelling bat to horse, and from horse to man. The bats had lived undisturbed for centuries in Queensland's eucalyptus forests. Now the forests are being cut down and the colonies of bats are roosting elsewhere...

Spillover tells the story of such diseases. As globalization spreads and as we destroy the ancient ecosystems, we encounter strange and dangerous infections that originate in animals but that can be transmitted to humans. Diseases that were contained are being set free and the results are potentially catastrophic.

In a journey that takes him from southern China to the Congo, from Cameroon to Kinshasa, David Quammen tracks these infections to their source and asks what we can do to prevent some new pandemic spreading across the face of the earth.

"A tremendous book...this gives you all you need to know and all you should know. Quammen’s research and the analysis make sensationalism unnecessary" (Bryan Appleyard Sunday Times)

"Mr Quammen is not just among our best science writers but among our best writers, period...that he hasn’t won a non-fiction National Book Award or Pulitzer Prize is an embarrassment... Quammen is a patient explainer and a winning observer, he has a novelistic flair for describing his fellow humans... Quammen, combining physical and intellectual adventure, wraps his canny explorations into powerful moral witness" (Dwight Garner New York Times)

"One of that rare breed of science journalists who blend exploration with a talent for synthesis and storytelling... This is a timely, serious and impressive work that marks the maturation of a field of microbiology" (Nathan Wolfe Nature)

A gripping and timely book about the transmission of highly dangerous diseases from animal to human populations.