Items related to Half Time: My Autobiography

Nigel Owens Half Time: My Autobiography

Half Time: My Autobiography 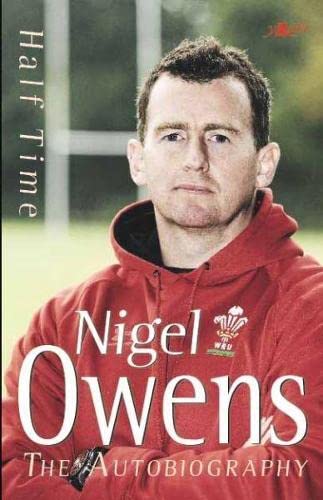 Nigel Owens is a world class, openly gay rugby referee from Wales. In this warm, funny and painfully honest autobiography, he speaks openly about his struggle to accept himself for who he was, resulting in attempted suicide, bulimia and steroid addiction. Owens also recounts many amusing incidents from rugby matches, foreign trips and his off-field career as an entertainer.

Nigel Owens is one of the world's leading rugby referees. Highly respected, he has officiated in many of the sport's key matches, including the 2007 Rugby World Cup, two consecutive Heineken Cup finals (one of only two referees to have done so), this year's British and Irish Lions tour
of South Africa, and the infamous recent `bloodgate scandal' match. He is also the only openly gay rugby union referee on the circuit. Before reaching the highest echelons of the rugby world, Nigel Owens had to come to terms with the despair that drove him to attempt suicide as he struggled with his sexuality, bulimia and an addiction to steroids. An inspirational story, his autobiography is a brave and honest account of his personal struggle to overcome fear and prejudice to become one of the most respected and well known personalities in international rugby union. Nigel Owens's warmth and humour (he worked as a comedian in South Wales in the 80s) shine through his story, which is brimming with anecdotes about matches he has refereed and players he has met along the way: from Gavin Henson's first match, to on-pitch altercations with Austin Healey, Lawrence Dallaglio's intimidation tactics, coping with live televised matches, and needing a police escort from the ground in Auch, France, to his thoughts on the recent Heineken Cup quarter final between Harlequins and Leinster on 12th April 2009, which was to rock the foundations of rugby worldwide when Harlequins wing
Tom Williams bit on a blood capsule and faked injury.

April 1996
It's half past three in the morning. I got up about an hour ago so that my parents wouldn't see me leaving the house. I hope they're still asleep so that I can do what I have to do. I've left a note telling them that I've reached the end of my tether and that the only solution for me now is to take my own life.
So many things have been playing on my mind for so long. I enjoy life but I have this obsession that I look obscenely fat, with the result that I have been suffering from bulimia for many years. I've also been going regularly to the gym to try and replace fat with muscle. In order to speed up that process, I began taking steroids and became hooked. They caused many side effects which, I'm sure, have contributed to my being in this particular place at this particular time.
There are so many positive aspects to my life, yet I'm feeling depressed and have been for some time. But I'm unable to tell anyone. The main reason for my despair is that I'm thoroughly unhappy with the type of person that I have become. There's another person inside me trying to get out but he doesn't know how. I'm gay but I don't know what to do about it. I don't want to be gay, and during the last few years I have tried so hard not to be. I feel that there's only one thing left for me to do, and that is to end my life before people find out about me.
I've come to the top of Bancyddraenen Mountain which overlooks the village of Mynyddcerrig where I've lived all my life. I have a number of sleeping tablets with me and I intend to take an overdose so that I can be rid of all my problems. In case the tablets don't work, I also have a shotgun.

October 2009
On looking back at that terrible chapter in my life, I can't believe that I sank into such a pit of despair. It came about because I was unable to accept who and what I am, but I will never allow myself to reach that state again. Since that time I've found so much pleasure in pursuing such rewarding and successful careers, both as a referee and as an entertainer. In addition I've received much valuable support and friendship from family and acquaintances. Never again will I put them through such hell. I very much hope, therefore, that Half Time will not only be an interesting read but will also provide comfort and inspiration for people who are having to face up to some of the problems that were such a burden to me in the past. I, thankfully, was able to overcome them.

1. Half Time: My Autobiography

Book Description Y Lolfa, 2009. Hardcover. Condition: Good. All orders are dispatched the following working day from our UK warehouse. Established in 2004, we have over 500,000 books in stock. No quibble refund if not completely satisfied. Seller Inventory # mon0005095062

2. Half Time: My Autobiography

Book Description Hardback. Condition: Very Good. The book has been read, but is in excellent condition. Pages are intact and not marred by notes or highlighting. The spine remains undamaged. Seller Inventory # GOR002343515

3. Half Time; Nigel Owens, The Autobiography