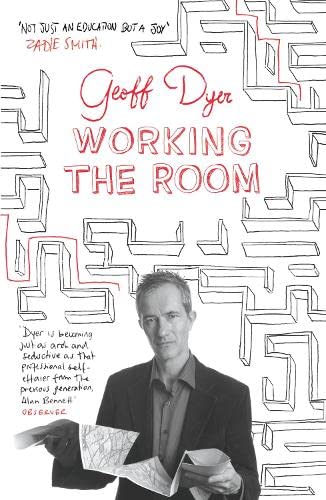 Working the Room 'Dyer is becoming a character just as arch and seductive as that professional self-effacer from the previous generation, Alan Bennett.' Observer Full description

"Dyer is becoming a character just as arch and seductive as that professional self-effacer from the previous generation, Alan Bennett." (Observer)

"A seductively straightforward writer . . . like Orwell. Dyer writes engrossingly on everything from love of doughnuts to his sequestered working class childhood in Swindon." (Will Self Financial Times)

"One of my favourite of all contemporary writers. I love his sense of the absurd, his pessimism mixed with robust good cheer, his beautifully crafted sentences, his jokes and his intelligence." (Alain de Botton)

"A true original - one of those rare voices in contemporary literature that never ceases to surprise, disturb and delight . . . Dyer is a must-read for our confused and perplexing times." (William Boyd)

"An irresistibly funny storyteller, [Dyer] is adept at fiction, essay and reportage, but happiest when twisting all three into something entirely his own." (New Yorker)

"It's this ability to develop such passions that gives the literary flaneur his curious edge, a gift for turning both acute spasms of obsession and long-rumbling preoccupations into writing, a highly strung take on the journalistic necessity of burrowing into a subject like a worm in an apple, then moving on to a new fruit" (Victoria Segal Guardian)

'Dyer is becoming a character just as arch and seductive as that professional self-effacer from the previous generation, Alan Bennett.' Observer

Book Description Paperback. Condition: New. Main. Language: English. Brand new Book. Alive with insight, wit and Dyer's characteristic irreverence, this book offers a guide around the cultural maze, mapping a route through the worlds of literature, art, photography and music. Besides exploring what it is that makes great art great, Working the Room ventures into more personal territory with extensive autobiographical pieces - 'On Being an Only Child', 'Sacked' and 'Reader's Block', among other gems. Dyer's breadth of vision and generosity of spirit combine to form a manual for ways of being in - and seeing - the world today. Seller Inventory # CLD9781847679376