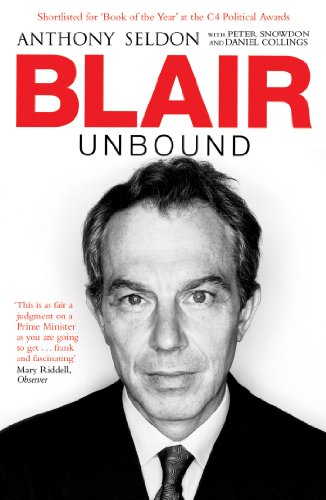 "A vivid portrait." "--The Wall Street Journal" "This account of the Blair era, so soon after its end, is likely to be the fullest for many years. It is a solid foundation stone for history. Even so, it does not quite answer the question: who is Tony Blair? No one could have cast a wider net than Seldon and yet his subject, elusive as ever, somehow slithers through its mesh." --"Observer" "An outstanding work that strives successfully to explain the man and his administration."" --Booklist" "One message is already clear, that modern government cannot work if its leadership is perpetually at odds with itself. In telling that tale, Seldon could not be bettered." --"Sunday Times"

The first volume of Anthony Seldon's riveting and definitive life of Tony Blair was published to great acclaim in 2004. Now, as the Labour Party and the country get used to their new leader and a new Prime Minister, Seldon delivers the most complete, authoritative and compelling account yet of the Blair premiership. Picking up the story in dramatic fashion on 11 September 2001, Seldon then brings us right up to date as Blair hands over the reins to his arch-rival, Gordon Brown. Based on hundreds of original interviews with key insiders, many of whose views have hitherto been kept private, BLAIR UNBOUND serves both as a fascinating 'volume two' of this masterclass in contemporary history and a highly revealing and compelling book in its own right.