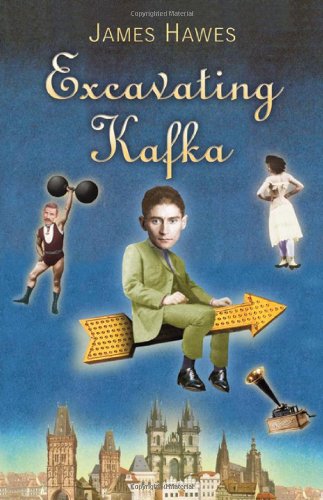 An authoritative and entertaining deconstruction of an icon of literary modernism

A revelation and a scream, this wonderfully irreverent book ends up paying Kafka a greater compliment than that of the `Kafka-myth', 5 stars

Kafka's features, and that dreaded word, Kafkaesque, are known to millions who have never read serious literature. Generations of academics and critics have maintained the image of Franz Kafka as a tortured seer whose works defy interpretation. In "Excavating Kafka"James Hawes reveals the truth that lies beneath the image of a middle-European Nostradamus with a typographically irresistible name. The real Franz Kafka was no angst-ridden paranoid but a well-groomed young man-about-town who frequented brothels, had regular sex with a penniless-but-pretty girl and subscribed to upmarket pornography (published by the very man who published Kafka's first stories)."Excavating Kafka" debunks a number of key facets of the Kafka-Myth, including the idea that Kafka was the archetypal genius neglected in his lifetime; that he was stuck in a dead-end job and struggling to find time to write; that he was tormented by fear of sex; that he had a uniquely terrible, domineering father who had no understanding of his son's needs; that his literature is mysterious and opaque; that he constructs fantasy-worlds in which innocent everymen live in fear of mysterious and totalitarian powers-that-be.

Written with the panache of a supremely gifted comic writer, "Excavating Kafka" is an engaging and involving reassessment of a major figure of literary modernism that will be welcomed and enjoyed by students of Kafka and by general readers alike.

Book Description Quercus, 2008. Hardcover. Condition: Very Good. Very Good: a copy that has been read, but is in excellent condition. Pages are intact and not marred by notes or highlighting. The spine remains undamaged. Most items will be dispatched the same or the next working day. Seller Inventory # wbb0015000329

Book Description Hardback. Condition: Very Good. The book has been read, but is in excellent condition. Pages are intact and not marred by notes or highlighting. The spine remains undamaged. Seller Inventory # GOR003604819

Book Description Quercus, 2008. Hardcover (Original Cloth). Condition: Very Good. Dust Jacket Condition: As New. First Edition. Size: Octavo (standard book size). 244 pages. Text body is clean, and free from previous owner annotation, underlining and highlighting. Binding is tight, covers and spine fully intact. No foxing in this copy. Dust Jacket is in as new condition, apart from normal shop shelf wear - contains no tears or chips or other damage. Dust Jacket un-clipped. All edges clean, neat and free of foxing. Quantity Available: 1. Shipped Weight: Under 1 kilogram. Category: Biography & Autobiography; Literature & Literary. ISBN: . ISBN/EAN: 9781847245441. Pictures of this item not already displayed here available upon request. Inventory No: 30288. For further info on this title, click on the "Ask Bookseller a Question" button directly underneath this listing. We will reply within 24 hours. Otherwise you can order right now (inclusive of shipping options) from the "Add to Basket" button to the right. Seller Inventory # 30288