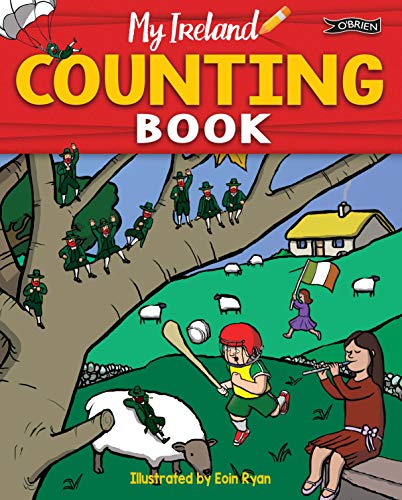 Add some Hurleys, Thatched Cottages, Tin Whistles, Bodhráns, Connemara Ponies and Irish Dancers (as well as lots of lively leprechauns) ... and you get a whole lot of counting fun!

'an interesting way of introducing numbers to the very young ... bold lines and strong, flat colour ... A nice touch is the inclusion of small leprechauns interspersed throughout for children to find and count.' --Irish Examiner

'My Ireland Counting Book is a charming little book for children utilizing objects and pastimes associated with Ireland ... The illustrations are strikingly attractive in vibrant colour and boldly depicted by Eoin Ryan' --In Touch

Eoin is a graduate of the National College of Art and Design with a BA in Visual Communications. He has worked in the Film and Television industry as a writer, designer and animator for clients that include Porsche, Unilever and RyanAir. Eoin's animated film DEMON won best short animation at the 2006 Galway Film Fleadh. He is also a recipient of the prestigous Silver ICAD for his copywriting work in print and television. Eoin's first live action film UNCLE BILL'S BARREL which he wrote and directed for the Irish Film Board has been screened in film festivals worldwide. In the two years since its debut, Eoin's web comic Space Avalanche has been seen by millions and has a growing worldwide readership.