Items related to An Old Pub Near the Angel

Kelman, James An Old Pub Near the Angel

An Old Pub Near the Angel 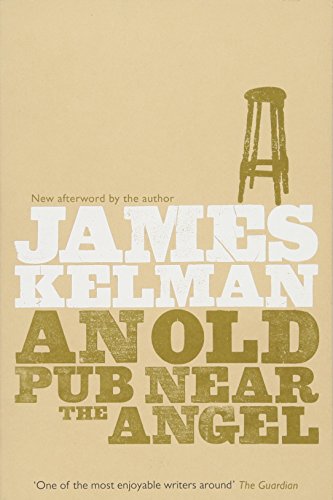 This is James Kelman's first collection of short stories - as fresh and sharp as when they first appeared from US publisher "Puckerbrush Press". Set among the tenements and bedsits of Glasgow, they shine a light on the exploits of young and old. James Kelman had been writing since about 1967 and by 1971 had enough stories for a book. In 1973, "An Old Pub Near The Angel" was published and the rest is history. The US edition has never been out of print.

James Kelman was born in Glasgow in 1946. After leaving school at 15 he worked in the printing industry and as a bus driver. In 1971 he attended creative writing night classes and in 1973 an American company published his first collection of short stories, An Old Pub Near The Angel. Greyhound for Breakfast won the 1987 Cheltenham Prize; A Disaffection won the James Tait Black Memorial Prize and was shortlisted for the Booker Prize; How Late it was, how late won the 1994 Booker Prize amidst a storm of controversy. He has also written many plays for stage and radio. He lives in Glasgow with his wife and family.

1. An Old Pub Near the Angel

2. An Old Pub Near the Angel

Book Description Paperback. Condition: Very Good. The book has been read, but is in excellent condition. Pages are intact and not marred by notes or highlighting. The spine remains undamaged. Seller Inventory # GOR001801168

3. An Old Pub Near the Angel

Book Description Condition: Good. A+ Customer service! Satisfaction Guaranteed! Book is in Used-Good condition. Pages and cover are clean and intact. Used items may not include supplementary materials such as CDs or access codes. May show signs of minor shelf wear and contain limited notes and highlighting. Seller Inventory # 1846970377-2-4