Items related to We Are All Completely Beside Ourselves: Shortlisted...

Fowler, Karen Joy We Are All Completely Beside Ourselves: Shortlisted for the Booker Prize

We Are All Completely Beside Ourselves: Shortlisted for the Booker Prize 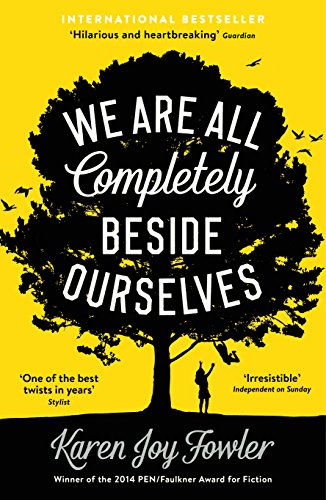 Shortlisted for the Man Booker Prize 2014The Million Copy Best-SellerRosemary's young, just at college, and she's decided not to tell anyone a thing about her family. So we're not going to tell you too much either: you'll have to find out for yourselves, round about page 77, what it is that makes her unhappy family unlike any other. Rosemary is now an only child, but she used to have a sister the same age as her, and an older brother., Both are now gone - vanished from her life. There's something unique about Rosemary's sister, Fern. And it was this decision, made by her parents, to give Rosemary a sister like no other, that began all of Rosemary's trouble., So now she's telling her story: full of hilarious asides and brilliantly spiky lines, it's a looping narrative that begins towards the end, and then goes back to the beginning. Twice. It's funny, clever, intimate, honest, analytical and swirling with ideas that will come back to bite you., We hope you enjoy it, and if, when you're telling a friend about it, you do decide to spill the beans about Fern - it's pretty hard to resist - don't worry. One of the few studies Rosemary doesn't quote says that spoilers actually enhance reading.

A novel so readably juicy and surreptitiously smart, it deserves all the attention it can get ... [Its] fresh diction and madcap plot bend the tone toward comedy, but it never mislays its solemn raison d'ętre. Monkeyshines aside, this is a story of every family in which loss engraves relationships, truth is a soulful stalker and coming-of-age means facing down the mirror, recognizing the shape-shifting notion of self (Barbara Kingsolver New York Times Book Review)

We Are All Completely Beside Ourselves is a dark cautionary tale hanging out, incognito-style, in what at first seems a traditional family narrative. It is anything but. This novel is deliciously jaunty in tone and disturbing in material. Karen Joy Fowler tells the story of how one animal-the animal of man-can simultaneously destroy and expand our notion of what is possible (Alice Sebold)

No contemporary writer creates characters more appealing, or examines them with greater acuity and forgiveness, than she does (Michael Chabon)

Fowler has given us the gift of a splendid novel. Not only is the story fascinating, moving, and beautifully written, but also it ripples with humor; its quirky characters include a puppet named Madame Defarge and a Seinfeldian assortment of apartment dwellers. Layered with a huge moral compass and enormous humanity, this portrait of a family one-fifth simian will, nevertheless, touch and delight every human (Boston Globe)

Hinges upon Rosemary's sharp voice, which at its best includes funny, self-aware asides such as an early reference to a character at a holiday dinner where she flippantly advises the reader, "Don't get attached to him; he's not really part of this story (LA Times)

We Are All Completely Beside Ourselves is that rare thing, a comic novel that wrestles seriously with serious moral questions ... Fowler knows how to make her story funny and sad and disturbing and revelatory by erecting a space in which her reader is allowed to feel all of that for herself (Salon)

So thought provoking on the topic of animal rights that it could alter your future decisions as a consumer. I don't want to say much about the plot of the book ... except to compare it to Ann Patchett's State of Wonder in terms of weaving a larger story of radical, scientific experimentation into a very personal woman's narrative (MSN)

Rosemary's voice is achingly memorable, and Fowler's intelligent discourse on science vs. compassion reshapes the traditional family novel into something more universally relevant... This brave, bold, shattering novel reminds us what it means to be human, in the best and worst sense (Miami Herald)

Halfway through Karen Joy Fowler's enthralling novel "We Are All Completely Beside Ourselves," I was sort of beside myself, too, with that electric thrill of discovering a great book. I wanted to stay up all night to finish it, but I also wanted to stop and call all my book-loving friends immediately and blurt, "You have to read this book!" (Cleveland Plain Dealer)

Shortlisted for the Man Booker Prize 2014

By the author of worldwide bestseller The Jane Austen Book Club: you can't choose your family, but they can make choices for you. Big, life-defining choices. Winner of the 2014 PEN/Faulkner Award for Fiction.

We are All Completely beside Ourselves

We Are All Completely Beside Ourselves

We Are All Completely Beside Ourselves