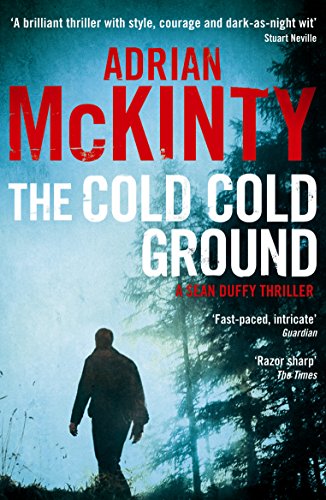 "McKinty is one of Britain's great contemporary crime writers and the Sean Duffy books are his masterpiece." - Ian Rankin

One left in a car by the side of a road. He was meant to be found quickly. His killer is making a statement.

The other is discovered hanging in a tree, deep in a forest. Surely a suicide: she'd just given birth, but there's no sign of the baby.

Nothing seems to link the two, but Detective Sergeant Sean Duffy knows the links that seem to be invisible are just waiting to be uncovered. And as a policeman who has solved six murders so far in his career, but not yet brought a single case to court, Duffy is determined that this time, someone will pay.

RAIN DOGS WAS WINNER OF THE EDGAR AWARD 2017

A razor sharp thriller told with style, courage and dark-as-night wit ... a brilliant novel with its own unique voice (STUART NEVILLE, AUTHOR OF THE TWELVE)

The Cold Cold Ground is fast-paced, intricate and crime to the core. (Guardian)

If Raymond Chandler had grown up in Northern Ireland, The Cold Cold Ground is what he would have written (Peter Millar Times 2012-01-14)

The Cold Cold Ground is a razor sharp thriller set against the backdrop of a country in chaos, told with style, courage and dark-as-night wit. Adrian McKinty channels Dennis Lehane, David Peace and Joseph Wambaugh to create a brilliant novel with its own unique voice (Stuart Neville)

The names of David Peace and Ellroy are evoked too often in relation to young crime writers, but McKinty shares their method of using the past as a template for the present. The Cold Cold Ground is a crime novel, fast-paced, intricate and genre to the core. (Eoin McNamee Guardian 2012-01-07)

Detective Sergeant Sean Duffy could well become a cult figure... McKinty has not lost his touch or his eye for the bizarre and the macabre, or his ear for the Belfast accent and argot. ...McKinty creates a marvellous sense of time and place... he manages to catch the brooding atmosphere of the 1980s and to tell a ripping yarn at the same time... There will be many readers waiting for the next adventure of the dashing and intrepid Sergeant Duffy. (Maurice Hayes Irish Independent 2012-01-07)

It's undoubtedly McKinty's finest . . . Written with intelligence, insight and wit, McKinty exposes the cancer of corruption at all levels of society at that time. Sean Duffy is a compelling detective, the evocation of 19802 Northern Ireland is breathtaking and the atmosphere authentically menacing. A brilliant piece of work which does for NI what Peace's Red Riding Quartet did for Yorkshire (Brian McGilloway)

McKinty's prose is a master-class in vicious poise . . . Be in no doubt that this novel is a masterpiece: had David Peace, Eoin McNamee and Brian Moore sat down, they would have been very pleased indeed to have written The Cold Cold Ground (Declan Burke)

The Cold Cold Ground is a fearless trip into Northern Ireland in the 1980s: riots, hunger strikes, murders - yet Adrian McKinty tells a very personal story of an ordinary cop trying to hunt down a serial killer' (John McFetridge)

Sean Duffy will do anything to solve this case. Including risking his life.