Items related to I Hear the Sirens in the Street: Detective Sean Duffy...

McKinty, Adrian I Hear the Sirens in the Street: Detective Sean Duffy 02

I Hear the Sirens in the Street: Detective Sean Duffy 02 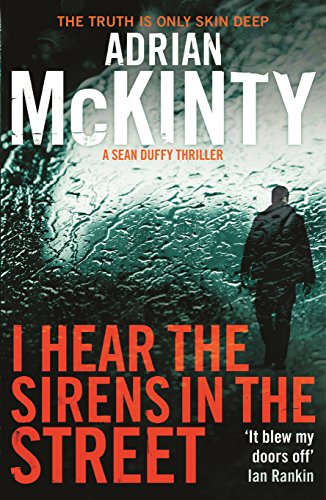 'McKinty is one of Britain's great contemporary crime writers and the Sean Duffy books are his masterpiece.'
IAN RANKIN
Sean Duffy knows there's no such thing as a perfect crime. But a torso in a suitcase is pretty close.

Still, one tiny clue is all it takes, and there it is. A tattoo. So Duffy, fully fit and back at work after the severe trauma of his last case, is ready to follow the trail of blood -- however faint -- that always, always connects a body to its killer.

A legendarily stubborn man, Duffy becomes obsessed with this mystery as a distraction from the ruins of his love life, and to push down the seed of self-doubt that he seems to have traded for his youthful arrogance.

So from country lanes to city streets, Duffy works every angle. And wherever he goes, he smells a rat...

RAIN DOGS WAS WINNER OF THE EDGAR AWARD 2017

It blew my doors off (Ian Rankin)

The ever-excellent Adrian McKinty is on great form with his new series ... characteristically fast and thrilling (Mail on Sunday)

Duffy is one of the most interesting, convincing and sympathetic police officers in recent crime fiction... McKinty gets better and better. (Marcel Berlins Times 2013-01-12)

A strain of rough and visual, sly and lyric narrative prose in service of one hell of a story. Sean Duffy is a great creation, and the place comes alive - a uniquely beautiful and nasty part of the world (Daniel Woodrell)

This novel is atmospheric, beautifully paced, precisely constructed, and genuinely hard to put down. Fans of the likes of Billingham, Rankin and Lehane will not want to miss out on McKinty (The Age)

This is a very fine police thriller from a rising start of the genre. The pacing is brisk and exciting, and the plotting is full of interest and surprises. (Canberra Times, Australia 2013-02-16)

McKinty keeps getting better and better ... Sirens is a humdinger - a highly enjoyable, smart, page-turner of a novel. (Anne Sexton Hot Press 2013-01-30)

Not everyone could tackle such a splintered society, but McKinty seems to relish its challenges as much as its opportunities... Sirens won't disappoint McKinty fans, and may well attract many more. (Mary Leland Irish Examiner 2013-03-02)

Don't miss out on McKinty's belting tale. Duffy mainlines into your bloodstream. Like the vodka and lime he's so fond of, he's definitely addictive. (Liz Kennedy Belfast News Letter 2013-03-20)

1. I Hear the Sirens in the Street (Detective Sean Duffy)