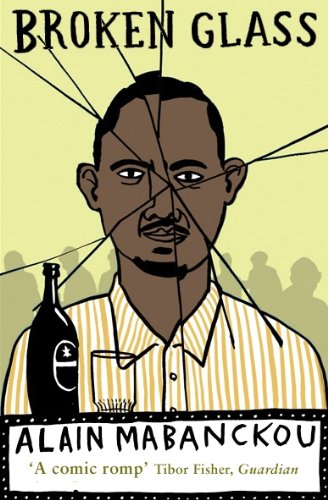 The history of Credit Gone West, a squalid Congolese bar, is related by one of its most loyal customers, Broken Glass, who has been commissioned by its owner to set down an account of the characters who frequent it. Broken Glass himself is a disgraced alcoholic school teacher with a love of French language and literature which he has largely failed to communicate to his pupils but which he displays in the pages of his notebook. The notebook is also a farewell to the bar and to his fellow drinkers. After writing the final words, Broken Glass will go down to the River Tchinouka and throw himself into its murky waters, where his lamented mother also drowned.

Broken Glass is a Congolese riff on European classics from the most notable Francophone African writer of his generation.

Broken Glass is a comic romp that releases Mabanckou's sense of humour... Although its cultural and intertextual musings could fuel innumerable doctorates, the real meat of Broken Glass is its comic brio, and Mabanckou's jokes work the whole spectrum of humour (Tibor Fischer Guardian)

Deserves the acclaim heaped upon it... self-mocking and ironic, a thought-provoking glimpse into a stricken country (Waterstone's Books Quarterly 2009-03-02)

This bar-room yarn-spinner tells his fellow tipplers' tales in a voice that swings between broad farce and aching tragedy. His farewell performance from a perch in "Credit Gone West" abounds in scorching wit and flights of eloquence... vitriolic comedy and pugnacious irreverence. (Boyd Tonkin Independent 2010-04-16)

A book of grubby erudition... full of tall tales that can entertain readers from Brazzaville to Bognor. (James Smart Guardian 2011-05-21)

From the winner of the Grand Prix de la Littérature 2012

Book Description Serpent's Tail, 2011. Paperback. Condition: Good. Minor Shelfwear. Good condition is defined as: a copy that has been read but remains in clean condition. All of the pages are intact and the cover is intact and the spine may show signs of wear. The book may have minor markings which are not specifically mentioned. Most items will be dispatched the same or the next working day. Seller Inventory # mon0014076993

Book Description Serpent's Tail, 2011. Soft cover. Condition: Fine. this book is available at a special rate as part of our community's provision for those socially isolating in Charlbury, Oxfordshire. Order this book for hand-delivery to any address in the town: we'll reimburse you Ł3 when we deliver it and we'll also donate 50p to the Corner House. Seller Inventory # 04041