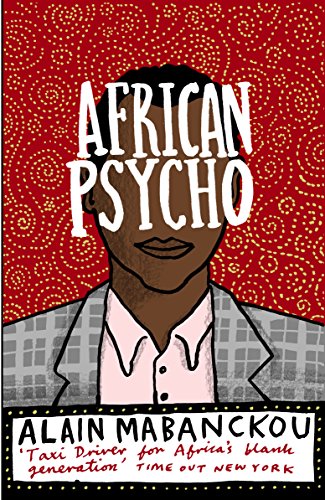 Gregoire Nakobomayo, a petty criminal, has decided to kill his girlfriend Germaine. He's planned the crime for some time, but still, the act of murder requires a bit of psychological and logistical preparation. Luckily, he has a mentor to call on, the far more accomplished serial killer Angoualima. The fact that Angoualima is dead doesn't prevent Gregoire from holding lengthy conversations with him. Little by little, Gregoire interweaves Angoualima's life and criminal exploits with his own. Continuing with the plan despite a string of botched attempts, Gregoire's final shot at offing Germaine leads to an abrupt unraveling. Lauded in France for its fresh and witty style, African Psycho's inventive use of language surprises and relieves the reader by injecting humor into this disturbing subject.

This is Taxi Driver for Africa's blank generation... a deftly ironic Grand Guignol, a pulp fiction vision of Frantz Fanon's 'wretched of the earth' that somehow manages to be both frightening and self-mocking at the same time. (Time Out, New York)

[An] auspicious debut from a francophone author who most certainly deserves to be discovered. It is smart, stylish and plenty "literary". (Globe and Mail)

Mabanckou's novel... discovers a fascinating new way to hang readers on those tenterhooks... African Psycho presents no gloomy Raskolnikov, nor the fixed sneer of Patrick Bateman, but a haunted burlesque. (The Believer)

Book Description Serpent's Tail. Paperback. Condition: Good. No Jacket. A copy that has been read, but remains in clean condition. All pages are intact, and the cover is intact. The spine may show signs of wear. Pages can include limited notes and highlighting, and the copy can include previous owner inscriptions. At ThriftBooks, our motto is: Read More, Spend Less. Seller Inventory # G1846686326I3N00

Book Description Serpent's Tail, 2008. Paperback. Condition: Used; Good. **SHIPPED FROM UK** We believe you will be completely satisfied with our quick and reliable service. All orders are dispatched as swiftly as possible! Buy with confidence! Aloysius Ihezie. Seller Inventory # mon0001541682

Book Description Serpents Tail, 2008. Paperback. Condition: Used; Good. **Simply Brit** Shipped with Premium postal service within 24 hours from the UK with impressive delivery time. We have dispatched from our book depository; items of good condition to over ten million satisfied customers worldwide. We are committed to providing you with reliable and efficient service at all times. Seller Inventory # 1512189