Items related to The Letters of John Murray to Lord Byron

Andrew Nicholson The Letters of John Murray to Lord Byron

The Letters of John Murray to Lord Byron 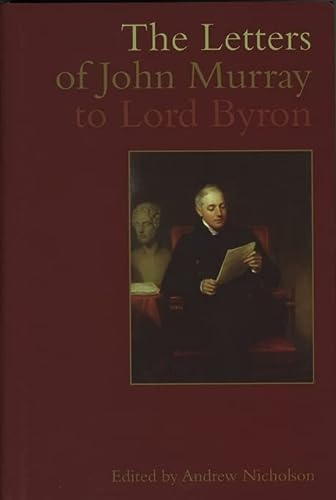 This is a critical edition of the collected letters of John Murray to Lord Byron whose works he published. These letters have never been published before, nor indeed (except in rare instances) has access to them ever been granted. They tell us a great deal about Byrons works and the manner of their publication, and about the aims, literary interest and vicissitudes of his publisher. They reveal the very special (indeed intimate) relationship unique in the annals of publishing that existed between the two men, both on a personal level and in their professional and artistic capacities. They show, for instance, to what extent Byron was amenable to Murrays suggestions as to alterations and revisions in his poetry, and how far Murray was prompted to publish works by authors at Byrons recommendation (Coleridges Kubla Khan and Christabel owe their publication to just such a recommendation). Besides illuminating many other details of historical and literary interest, they throw considerable light on publishing practice at the time, on Murrays relations with fellow publishers (Blackwood and Constable in Edinburgh and Galignani in Paris, for instance), and with numerous other authors (such as Austen, Hogg, Hunt, Washington Irving, Scott, Madame de Stael), not to mention the vast circle of literati, scientists, travellers and politicians who frequented his drawing room.

This is a work to which scholars of the Romantic period will refer from the moment it is published, and one whose scholarship will survive for decades. In the literary and cultural sense, a treasure trove. --Professor Paul Douglass, San Jose State University

Wholly original and very impressive in its scope There is no doubt whatsoever that all Byronists would read this volume, admire and learn from the work that has gone into it, and be modified in their views by what they read here. --Bernard Beatty, University of Liverpool

Andrew Nicholson is a renowned Byron scholar and the author of several books on the Romantic period. Previous books include Lord Byron: The Complete Miscellaneous Prose (OUP, 1991)

1. The Letters of John Murray to Lord Byron