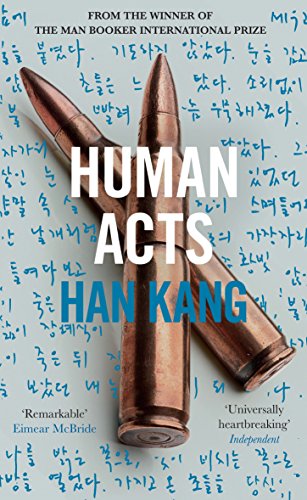 Gwangju, South Korea, 1980. In the wake of a viciously suppressed student uprising, a boy searches for his friend's corpse, a consciousness searches for its abandoned body, and a brutalised country searches for a voice. In a sequence of interconnected chapters the victims and the bereaved encounter censorship, denial, forgiveness and the echoing agony of the original trauma. Human Acts is a universal book, utterly modern and profoundly timeless. Already a controversial bestseller and award-winning book in Korea, it confirms Han Kang as a writer of immense importance.

'[Han Kang's] way of telling about the events of a 10-day insurgency in Gwangju, South Korea in 1980 and its psychological, spiritual and oplitical aftermath opened my eyes to the cruelty and viciousness perpetrated on the youth of that city. Her writing is spare and yet clotted with emotion' -- Susie Orbach, Best Books of 2016, Guardian

'Powerful and disturbing... lyrical and chilling' -- Mail on Sunday

'With exquisitely controlled eloquence, the novel chronicles the tragedy of ordinariness violated in the echo chambers of Han's haunting prose, precisely and poetically rendered by Smith, the sound of that heartbeat resonates with defiant humanity' -- New Statesman

'Han Kang's writing is clear and controlled and she handles the explosive, horrifying subject matter with great warmth' -- The Times

'Searing. In Human Acts [Kang] captures the paradox of being human: the meat-like, animal reduction of our humanity the dead bodies of the beginning chapter alongside our ability to love and suffer for our principles, and die for them, that make us truly human. She is excellent in summarizing this paradox. If it hopes to tie the personal with the political, it does the former so much more powerfully: a mother thinking of her dead son, for example, displays literary mastery as subtle and specific as it is universally heartbreaking' -- Independent

'A technical and emotional triumph... A conversation of which we rarely hear both sides: the living talking to the dead, and the dead speaking back' -- Sunday Telegraph (5 star review)

'A grim but heartfelt performance, touching on the possibility of forgiveness and the survival of the spirit' -- Sunday Times

'Harrowing, Human Acts portrays people whose self-determination is under threat from terrifying external forces; it is a sobering meditation on what it means to be human' -- Financial Times

'A harrowing journey. By its very existence Human Acts is an important and necessary book. Astonishing' -- National

'Human Acts is a stunning piece of work. The language is poetic, immediate, and brutal. Han Kang has again proved herself to be a deft artist of storytelling and imagery' -- Jess Richards

'A rare and astonishing book, sensitively translated by Deborah Smith, Human Acts enrages, impassions, and most importantly, gives voices back to who were silenced' -- Observer

'This sometimes ghostly narrative is elliptical and self-conscious about the difficulty of accounting for the legacy of state violence... poignant' --Paperback of the week, Observer

'Raw and beautiful, Han's prose was as contrary as the human acts she described' -- New Internationalist

'Human Acts is elegantly written, unflinchingly brutal and absolutely real. It is not so much a novel as it is a profound act of connection; it is beyond powerful. Han Kang is what most writers spend their lives trying to be: a fearless, unsentimental teller of human truths' --Lisa McInerney, Baileys Women's Prize-winning author of The Glorious Heresies

'Beautiful and brutal... A fearless examination of the state of humanity and the diagnosis isn't good. This is the pitiless kind of novel that burrows into its reader' -- Best Books of 2016 Irish Times

'Though there's violence and bloodshed on a large scale in Han's depiction of the Gwangju Uprising, it is the small human movements that I found the most vivid. That contrast helped to create the strongest experience of all the books I read this year' -- David Hebblethwaite

'[Human Acts] unblinkingly explores the aftermath of one of the darkest moments in South Korean history... It's written with a clear-eyed exactness that is at times horrifying... Ultimately, this is a harrowing novel that deftly examines human cruelty'

'Harrowing... Han's novel is an attempt to verbalize something unspeakable But she humanizes the terrible violence by focusing on the more mundane aspects: tending and transporting bodies, or attempting to work an ordinary job years later. And by placing the reader in the wake of Dong-ho's memory, preserved by his family and friends, Han has given a voice to those who were lost' --Publishers Weekly

HAN KANG was born in Gwangju, South Korea, and moved to Seoul at the age of ten. She studied Korean literature at Yonsei University. Her writing has won the Yi Sang Literary Prize, the Today's Young Artist Award, and the Korean Literature Novel Award. The Vegetarian, her first novel to be translated into English, was published by Portobello Books in 2015 and won the 2016 Man Booker International Prize. She currently teaches creative writing at the Seoul Institute of the Arts. DEBORAH SMITH's translations from the Korean include two novels by Han Kang, The Vegetarian and Human Acts, and two by Bae Suah, A Greater Music and Recitation. In 2015 Deborah completed a PhD at SOAS on contemporary Korean literature and founded Tilted Axis Press. In 2016 she won the Arts Foundation Award for Literary Translation. She tweets as @londonkoreanist.

Book Description Paperback. Condition: New. Language: English. Brand new Book. Gwangju, South Korea, 1980. In the wake of a viciously suppressed student uprising, a boy searches for his friend's corpse, a consciousness searches for its abandoned body, and a brutalised country searches for a voice. In a sequence of interconnected chapters the victims and the bereaved encounter censorship, denial, forgiveness and the echoing agony of the original trauma.Human Acts is a universal book, utterly modern and profoundly timeless. Already a controversial bestseller and award-winning book in Korea, it confirms Han Kang as a writer of immense importance. Seller Inventory # AA99781846275975