Items related to It's Only a Movie: Alfred Hitchcock, a Personal...

It's Only a Movie: Alfred Hitchcock, a Personal Biography (Charnwood Large Print) 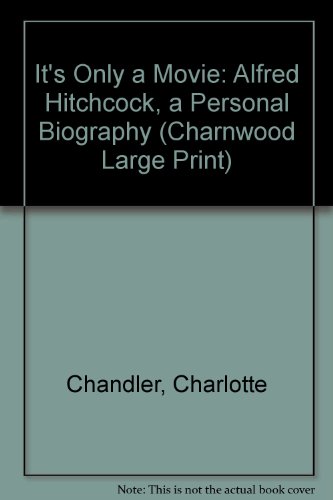 Alfred Hitchcock never wrote an autobiography and IT'S ONLY A MOVIE is as close to one as we will ever have. Drawn from years of interviews with Hitchcock his friends and the actors who worked with him on such classics as THE BIRDS, PSYCHO and REAR VIEW WINDOW, Charlotte Chandler has created a rich, complex, affectionate and honest picture of the man and his milieu. Chandler interviewed many of the stars who appeared in his films, among them Cary Grant, Ingrid Bergman, James Stewart, Sir Laurence Olivier, Sir Michael Redgrave, Sir John Gielgud, Tippi Hedren, James Mason, Kim Novak, Anthony Perkins and Janet Leigh. IT'S ONLY A MOVIE is a rich, affectionate and honest look at the life of the master of suspense who made cinematic history.

'A wonderful study of Hitchcock the man and Hitchcock the film-maker' John Landis 'Hitchcock came from south London, like me, and I really liked this book so I figure he would as well' Michael Caine 'IT'S ONLY A MOVIE is not only a book but a vivid experience, a real page-turner. Through Charlotte Chandler's books, we've come to know Groucho Marx, Federico Fellini and Billy Wilder - and now we know Alfred Hitchcock' Sidney Sheldon 'A perfect murder? It's only a movie. A perfect book!' Michelangelo Antonioni 'It's Only a Movie is a brilliant working and personal biography of Hitchcock which captures the director and the man as never before' Sheridan Morley 'The life of the self declared 'frightmare' expert is told through a web of quotes and points of view artfully stitched together in a way that bring his genuine nature to light... Chandler skilfully contrasts the filmmaker's self critical but insightful and witty character with his stern professional side' Lindsay Pfeffer, OBSERVER 'Breezy and anecdotal' FINANCIAL TIMES 'Charlotte Chandler has written the best book ever written about my father' Patricia Hitchcock 'Chandler's memoir is fluent, chronological and has time for humorous moments' The Herald (Glasgow) 'Charlotte Chandler has spoken to an impressive range of people about the British-born director ... like all gossip, it's thoroughly absorbing ... she knows her way around a film set and faithfully reports Hitch's compulsions' METRO LONDON 'The core of this book is some lengthy conversations with Hitchcock in which he expresses himself with his customary dry humour. In addition Chandler spoke over the years to innumerable Hitchcock collaborators, including Laurence Olivier, Cary Grant, Joseph Cotten, Gregory Peck, Joan Fontaine and Grace Kelly. The results are fascinating.' Christopher Wood, THE TIMES 'CHarlotte Chandler's elegantly written study of the great director benefits from extensive first-person interview material with Hitchcock, as well as his friends and stars. Truly fascinating... ' Observer 'Chandler reveals insights into both man and director, cleverly contrasting his self-critical but witty insightful nature with his stern professionalism' Daily Express, 13/1 ' A convincing portrait emerges of the master of suspense at work' Sunday Times, 15/1 ' Contains a wealth of information about the private man. An intimate portrait of one of the towering figures of cinema' Mail on Sunday, 15/1

Charlotte Chandler is the author of three higly acclaimed books, HELLO, I MUST BE GOING: GROUCHO AND HIS FRIENDS, THE ULTIMATE SEDUCTION, and I, FELINI.