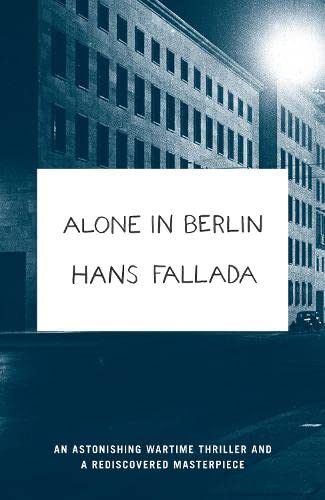 Berlin, 1940, and the city is filled with fear. At the house on 55 Jablonski Strasse, its various occupants try to live under Nazi rule in their different ways: the nervous Frau Rosenthal, the bullying Hitler loyalists the Persickes, the retired judge Fromm and the unassuming working-class couple Otto and Anna Quangel. Then the Quangels receive the devastating news that their beloved son has been killed fighting in France.

Shocked out of his quiet existence, the usually taciturn factory foreman Otto is provoked into an action that will endanger both his and Anna's life. With her help, he begins to drop hundreds of anonymous postcards attacking Hitler in stairwells and offices all over the city. If they are caught, they will be executed for treason.

As their silent campaign escalates, the cards come to the attention of the ambitious Gestapo inspector Escherich, and a deadly game of cat and mouse develops between them. When petty criminals Kluge and Borkhausen also become involved, blackmail, deception, betrayal and murder ensue, gradually tightening the noose around the Quangels' necks ...

'An unrivalled and vivid portrait of life in wartime Berlin'. - Philip Kerr

Fallada's prose...has a journalistic clarity and a thriller writer's pace.