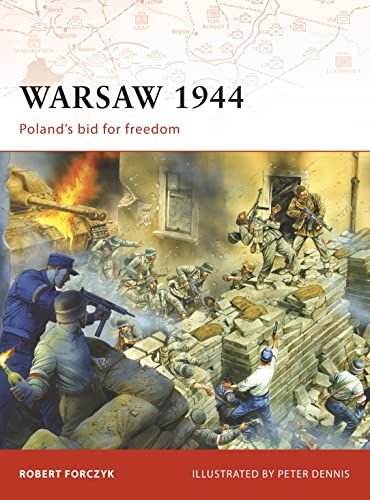 Defeated and occupied in 1939, Poland had suffered under the Nazi heel for nealy five years. Undaunted, however, the Poles formed an underground army, the Armia Krajowa (Home Army), and waited for a moment of German weakness. That moment seemed to have arrived in July 1944 as the Soviet armies began to advance into eastern Poland. The AK launched its revolt in Warsaw on 1 August 1944. Though its 5,000 fighters achieved some initial successes, the Germans were able to retain control over both the Vistula River bridges and the airbase, dooming the revolt to isolation and defeat. The SS was put in charge of suppressing the rebellion, beginning a wave of atrocities shocking even by Eastern Front standards.

"Throughout the book, author Robert Forczyk has used available archival materials to bring this story to us. Thanks to a goodly number of period photos from all sides of the conflict as well as the superb illustrations of Peter Dennis, we are able to visualize what it was like during the insurrection. It is a gripping tale of bravery, tactical errors, and a look that what could have been were not the Allies so callous in their unwillingness to provide assistance. It is a book that I think every scholar of WWII should have on their shelves." --Scott Van Aken, www.modelingmadness.com (April 2009)

"Reading this book is a humbling experience. It gives one strong insight into what courage and defiance are all about... This highly recommended book is a must-read for students of modern history as well as anyone interested in German armor." --Peter Terry, Toy Soldier and Model Figure

Tells the story of the dramatic uprising of the Polish Home Army in Warsaw in 1944.

Book Description Bloomsbury, 2020. Paperback. Condition: NEW. 9781846033520 This listing is a new book, a title currently in-print which we order directly and immediately from the publisher. Print on Demand title, produced to the highest standard, and there would be a delay in dispatch of around 10 working days. For all enquiries, please contact Herb Tandree Philosophy Books directly - customer service is our primary goal. Seller Inventory # HTANDREE01010017