Items related to The Australian Army in World War II: No. 153 (Elite) 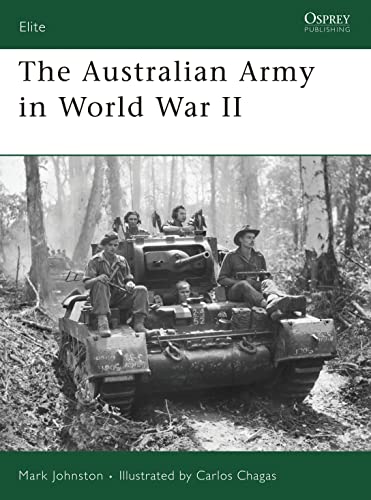 This book recounts the organization and deployment of one of the most important fighting armies of World War II. Australian divisions made a large and distinctive contribution to victory both in the deserts of the Middle East and the jungles of the South-West Pacific, earning for the second time a unique reputation for aggressiveness, endurance and independence of spirit. The text is illustrated with original wartime photos from all fronts; and with full colour plates showing a wide range of uniforms and gear, together with the complex and colourful Australian system of unit insignia.

"Overall an interesting read, and a must-have for modellers and history buffs alike if only to give an insight into a small countries' sometimes large contributions to many chapters of the eventual Allied victory." --Bradley J, Armorama (August 2007)

"Throughout there are superb period photographs and the excellent illustrations of Carlos Chagas, which really help bring to life the way these men looked when in combat. An overall outstanding reference on World War 2 Aussie troops and their equipment. One that the enthusiast simply has to have in his reference library." --Scott Van Aken, modelingmadness.com (July 2007)

"Mark Johnston's The Australian Army in World War II joins others in the 'Elite' series for military libraries, considering the organization and deployment of one of the most significant fighting armies of the war. While plenty of World War II titles provide overviews of the army, this is the item of choice for any seeking depth and detail, with original wartime black and white photos from all fronts adding illustration and enhancing color plates of uniforms and gear." --California Bookwatch (August 2007)

..". a well-researched book ... with information on all its campaigns ... aimed at the history buff or the figure modeler who wants to re-create detailed scale figures of WWII Australian soldiers and their equipment." --Cliff Hutchings, Toy Soldier & Model Figure (April 2008)

Mark Johnston was born in 1960. He has written five books and numerous articles on the Australian Army in World War II. He also has a doctorate on that topic from the University of Melbourne. He is currently the Head of History at Scotch College, Melbourne. Carlos Chagas was born in Rio de Janeiro and attended the National School of Fine Arts in Brazil. Following his graduation he has received several commissions which have included traditional painting, comic strip artwork, book and magazine covers, and advertising. His main interest is the military history of the two World Wars and he enjoys building plastic models of this period.