Items related to The Citizen of the World

Oliver Goldsmith The Citizen of the World

The Citizen of the World 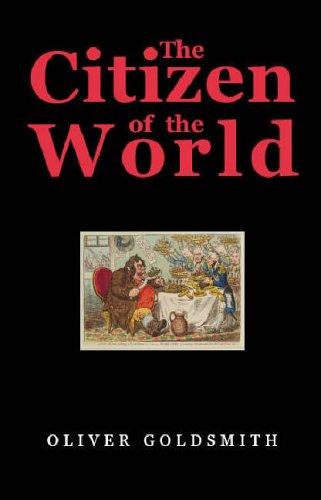 The Chinese philosopher named Lien Chi Altangi writes a series of travel letters to his friend from London. Through these witty letters, Goldsmith exposes both England's most ridiculous customs and its defining characteristics. He uses a foreign traveller as the naive narrator of a contemporary social satire - quite a common device used by writers at the time to mask there own social criticisms. It is a highly entertaining and inspiring adventure in literature.

Oliver Goldsmith was an Anglo-Irish author in the mid eighteenth century. His fame grew with The Traveller, a philosophic poem and peaked the nostalgic pastoral The Deserted Village. He is remembered as one of Ireland's great writers for his wit and sharp social commentary of the often harsh and unequal times he lived in.

1. The Citizen of the World

Book Description History Press Ltd, 1979. Paperback. Condition: Very Good. UK ed. The book has been read, but is in excellent condition. Pages are intact and not marred by notes or highlighting. The spine remains undamaged. Seller Inventory # GOR005795237