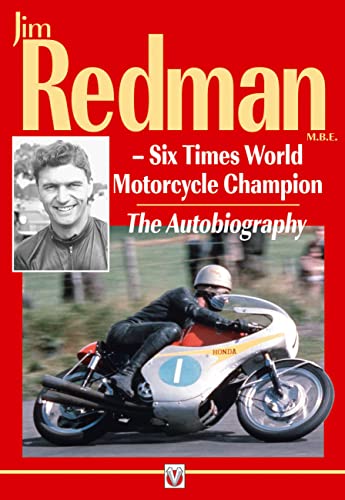 This book tells the incredible rags-to-riches story of one of the world's greatest motorcycle racers. From humble beginnings in 1930s London, to winning six world titles, Jim Redman MBE is one of GPs most extraordinary characters, and a true legend of motorcycle racing. After migrating to South Africa, he started his racing career in the mid-fifties, and was awarded an MBE in 1964 - a year that also saw him win three World Championships in a single day, a feat, to this day, matched only by Mike Hailwood.
During the mid-60s, Jim was THE man to beat on track, but a bad crash at the '66 Belgian GP ended his racing career. Following this, Jim was involved in a number of business ventures - including helping his two sons with their own successful sports careers, and owning a champion sire race horse - until, in 1995, he once again took up a career in racing as a Classic Racer and Demonstration Rider.

Review from the Classic MotorCycle, December 2008 A successful businessman and also a very good writer, Jim Redman was awarded the MBE in 1971. This is an excellent book and an unrivalled narrative of the life of a professional road racer. - The extraordinary life story of the penniless orphan and colonial adventurer who, aboard the most glamorous racing motorcycles, roared to six hard-fought World Championships and won for himself the reputation of hard man of the race track and shrewd, steely professional of the paddock. Compared to Redman, modern G.P. riders are a bunch of adolescent softies." - Andy Kershaw

Jim Redman is one GP racing's true legends. From humble beginnings in Hampstead Heath, he emigrated to South Africa, where he began his racing career, going on win six World Championships. In 1964 he was awarded an MBE, but his racing career was cut short following a crash during the '66 Belgian GP. After a range of business ventures, including supporting his two sons' own sports careers, he once again took up racing, in the form of Classic Racing, in 2004.