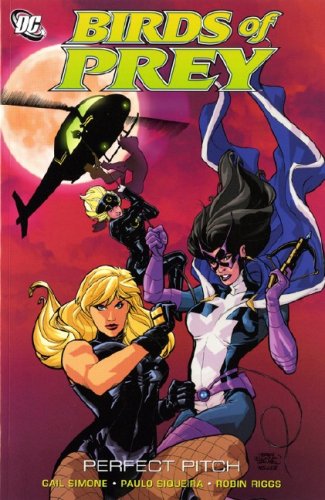 Meet the Birds of Prey: Oracle, a computer genius; Black Canary, armed with a voice that can shatter stone; and Huntress, a formidable vigilante with something to prove. The new Secret Society of Super-Villains has its own tactical genius, the Calculator - and he's obsessed with discovering Oracle's secret identity, kidnapping sometime ally Savant, and involving the terrifying Deathstroke! Meanwhile, the Huntress continues her vendetta against the Gotham mafia, and Black Canary makes a deal with the devil! This latest all-action collection is written by fan-favourite Gail Simone ("Superman") with fantastic artwork by Joe Bennett ("Buffy the Vampire Slayer") and guest artists including "Batman: The Animated Series" designer Bruce Timm!

Gail Simone is the fan-favourite writer of Villains United, Superman: Action Comics, Rose & Thorn, Deadpool and The Simpsons. She is currently writing Gen 13 and Secret Six. Joe Bennett began his comics career on Ravage 2099 for Marvel, and has since pencilled Buffy the Vampire Slayer, Captain America, Conan, Fantastic Four, The Incredible Hulk, Hawkman, Machine Man, Supreme and many more!

Book Description Titan Books Ltd, 2007. Paperback. Condition: Very Good. Very Good: a copy that has been read, but is in excellent condition. Pages are intact and not marred by notes or highlighting. The spine remains undamaged. Most items will be dispatched the same or the next working day. Seller Inventory # mon0012548481

Book Description Titan Books Ltd, 2007. Paperback. Condition: Good. Good condition is defined as: a copy that has been read but remains in clean condition. All of the pages are intact and the cover is intact and the spine may show signs of wear. The book may have minor markings which are not specifically mentioned. Most items will be dispatched the same or the next working day. Seller Inventory # wbb0013447260