Items related to Hellblazer: Stations of the Cross

Hellblazer: Stations of the Cross 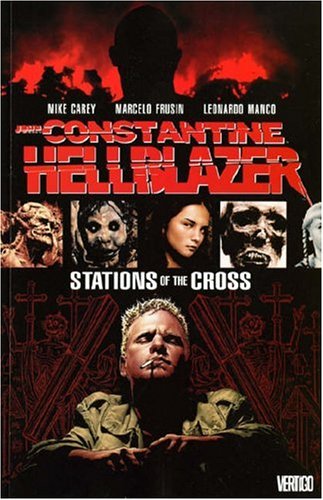 Written by Mike Carey Art by Leonardo Manco, Chris Brunner, Marcelo Frusin and Steve Dillon Cover by Tim Bradstreet Collecting HELLBLAZER #194-200, STATIONS OF THE CROSS finds John Constantine in the aftermath of the near-apocalypse he unwittingly caused, alone and with no memory of his identity or history. But the Hellblazer still has his usual luck, and soon enough he's being hunted by man and demon alike -- and about to make the worst mistake of his long, blood-soaked life.

Movie star - comic book icon - John Constantine, the legendary chain-smoking, hard-drinking man of the occult is back! His mind a blank slate after the events of Staring at the Wall, John Constantine makes a desperate gambit to recover his memory: he allows a demon control of his body for a single day. But a day in Hell is a long, long time, and the trouble Constantine unleashes will have fatal repercussions for almost everyone he knows...not least himself. Will Constantine ever be the same again? Mike Carey and Marcelo Frusin conclude their outstanding run on Hellblazer, taking Constantine on one final trip to hell - but is he coming back? Warning: Adults Only!

1. Hellblazer: Stations of the Cross

Book Description Paperback. Condition: Very Good. The book has been read, but is in excellent condition. Pages are intact and not marred by notes or highlighting. The spine remains undamaged. Seller Inventory # GOR007011714

2. Hellblazer: Stations of the Cross

3. Hellblazer: Stations of the Cross

Book Description Titan Books Ltd, 2006. Paperback. Condition: Good. Ex Library Book with usual stamps and stickers. Tan to the page edges. Small ink marks to a few page corners. Good condition is defined as: a copy that has been read but remains in clean condition. All of the pages are intact and the cover is intact and the spine may show signs of wear. The book may have minor markings which are not specifically mentioned. Most items will be dispatched the same or the next working day. Seller Inventory # mon0012064629