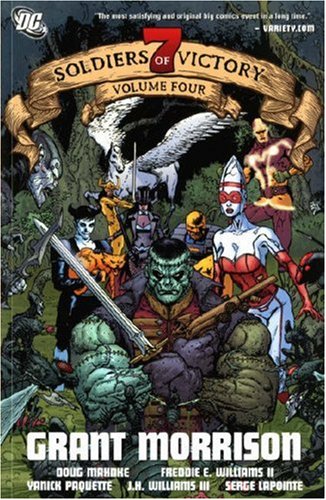 Grant Morrison's most ambitious project to date is a genre-blending tale of seven unusual characters who find themselves in a new army for a dark age! This final volume features super-escape-artist Mister Miracle, immortal assassin Frankenstein, and the Bulleteer, accident victim and reluctant superheroine! Plus the senses-shattering conclusion to the entire "Seven Soldiers" saga, featuring the final battle between the soldiers and the Sheeda! A soldier will die...but will the time-travelling, reality-consuming Sheeda finally be stopped? Morrison is joined by top artists Doug Mahkne ("Batman"), Yanick Paquette ("Avengers"), JH Williams III ("Promethea") and more to create this unmissable final chapter!

Grant Morrison is one of comics' most innovative writers. His long list of credits includes Seven Soldiers, JLA, Animal Man, Doom Patrol, New X-Men, The Invisibles and The Filth. He is currently working on the smash hit All Star Superman and Batman.