Items related to Road to Perdition: On the Road v. 2

Road to Perdition: On the Road v. 2 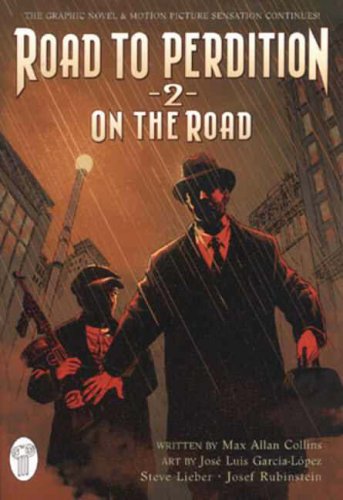 The best-selling graphic novel and inspiration for 2002's hit film The Road to Perdition introduced the world to hitman Michael O'Sullivan (played by Tom Hanks). O'Sullivan and his son are still on the run from Al Capone after Michael Jr. witnessed a mob murder. Michael and his son seek vengeance for the death of Michael's wife and younger son by robbing banks along the way and disrupting Capone's cashflow. However, they are still being pursued by dangerous bounty hunters, and their paths are destined to cross again in a hail of gunfire! Written by award-winning writer Max Allan Collins (Batman: Child of Dreams) and featuring a new cover by Jose Luis Garcia-Lopez -- this collects the entire saga.

...the story...stands proudly as a rip-roaring melodrama thats filled to the brim with fascinating incidents. -- Aint it Cool News 23 July 2002

Author of Road to Perdition, the acclaimed graphic novel that inspired the movie, and of the multiple-award-winning Nathan Heller series of historical hardboiled mysteries, Max Allan Collins is one of most prolific and popular authors working in the field today. He is also the literary executor of Mickey Spillane.