Items related to The Mammoth Book of the Best of Best New SF (Mammoth... 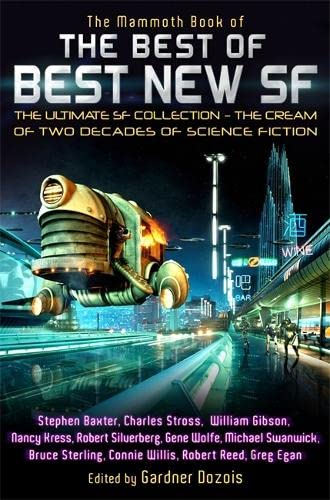 Hugo Award-winning editor Gardner Dozois’ annual anthology has long been considered the standard by which other best-of-the-year SF collections are judged. After two decades’ worth of superlative science fiction, Dozois now presents a retrospective compilation culling from the last 20 years. Here under one banner is some of the finest work by the genre's leading authors, with a star-studded list of contributors that features among others: Stephen Baxter, Greg Bear, William Gibson, Terry Bisson, Greg Egan, Ursula K. Le Guin, Robert Reed, Robert Silverberg, Bruce Sterling , Charles Stross, Michael Swanwick, Gene Wolfe. A number of the selections are now considered classics. Some notable stories include: ‘Blood Music’, Greg Bear's Hugo-winning exploration of nanotechnology. ‘Bears Discover Fire’, Terry Bisson's tongue-in-cheek consideration of future ursine evolution. ‘The Left Hand of Darkness’, Ursula K. Le Guin’s coming-of-age SF tale. ‘The Winter Market’, in which William Gibson returns to the subject that made him a cultural icon, cyberpunk. With work spanning two decades, this is the most significant science fiction short story anthology published in years.

The closest thing the field has to a single 'canon-forming' volume. (Strange Horizons)

Dozois has gathered together a stunning array of the best in shorter SF. (Publishers Weekly)

There is no one better qualified to edit this book. If Gardner Dozois says these are the best of the best, you can bet the farm on it. (Mike Resnick)

The ultimate SF anthology – the cream of 20 years of annual Best New SF.

1. The Mammoth Book of the Best of Best New SF

Book Description Robinson, 2008. Paperback. Condition: Used; Very Good. Dispatched, from the UK, within 48 hours of ordering. Though second-hand, the book is still in very good shape. Minimal signs of usage may include very minor creasing on the cover or on the spine. Damaged cover. The cover of is slightly damaged for instance a torn or bent corner. Seller Inventory # CHL5689290

Book Description Paperback. Condition: Fair. A readable copy of the book which may include some defects such as highlighting and notes. Cover and pages may be creased and show discolouration. Seller Inventory # GOR003363773

Book Description Paperback. Condition: Good. The book has been read but remains in clean condition. All pages are intact and the cover is intact. Some minor wear to the spine. Seller Inventory # GOR001352745

Book Description Paperback. Condition: Very Good. The book has been read, but is in excellent condition. Pages are intact and not marred by notes or highlighting. The spine remains undamaged. Seller Inventory # GOR001516712

7. THE MAMMOTH BOOK OF THE BEST OF BEST NEW SF - THE ULTIMATE SF COLLECTION - THE CREAM OF 2 DECADES OF SCIENCE FICTION