Items related to The Great Edwardian Gardens of Harold Peto: From the...

The Great Edwardian Gardens of Harold Peto: From the Archives of "Country Life" (Country Life) 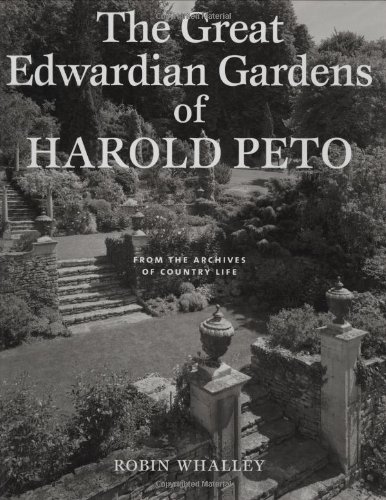 Harold Peto (1854-1933) was one of the great landscape designers of the Edwardian era. A great exponent of the ultra-romantic Italianate style so fashionable in the first two decades of the twentieth century, he was also influenced by the Arts and Crafts movement. Much admired by both Gertrude Jekyll and Edwin Lutyens, he was recognised as one of the most successful garden designers of his generation, building up a formidable reputation for his work both in England and the South of France. Garden historian Robin Whalley's illuminating commentary is brought to life by 200 dazzling photographs from the Country Life archive, showing many of Peto's gardens in their heyday. Among those featured are: Iford Manor, Peto's own house and garden; Easton Lodge, the garden of Daisy, Countess of Warwick, with its pergola, water garden and Japanese tea house; West Dean, which boasts a 300-foot pergola; and Ilnacullin in Eire, one of his best-known gardens. This latest volume in the acclaimed Country Life series is of great appeal to garden historians, designers and amateur enthusiasts alike.

"Captures the lavish, languid but formal beauty that once flourished around the aristocratic homes of England." --Cox News Service

Robin Whalley is a well-known authority on Victorian and Edwardian gardens and has made the work of Harold Peto a key area of research. He was awarded a fellowship from Harvard University to study at Dumbarton Oaks, Washington DC in 1994, was a consultant at the National Botanic Garden of Wales, and is currently a part-time lecturer at Cardiff and Bristol Universities. He regularly organises and leads garden tours, and lectures widely on this subject. He is the author of The Great Edwardian Gardens of Harold Peto and co-author of Knot Gardens and Parterres. He also contributes to many magazines, including Hortus, The Garden and Gardens Illustrated.

1. The Great Edwardian Gardens of Harold Peto: From the Archives of "Country Life" (Country Life)

Book Description Aurum Press, 2007. Hard Cover. Condition: New. New book. 192 pages including bibliography and index. Plastic cover protecting dust jacket. Beautifully illustrated with over 150 photographs from the Country Life archive and with the Robin Whalley illuminating commentary, the book is an inspiring survey of the life and works of one of Britains most influential garden designers. Seller Inventory # 003034