Items related to A Long Way from Home 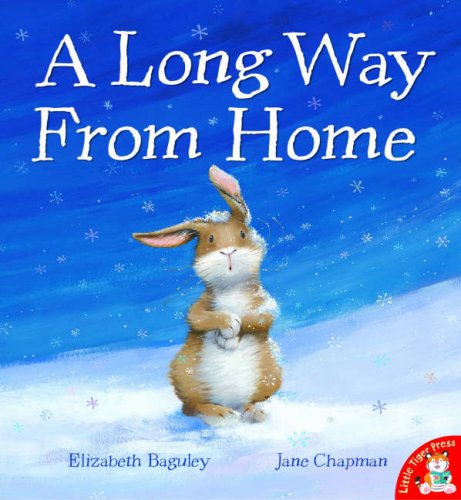 A Long Way from Home At bedtime in the burrow Moz is squished and squashed by sleepy rabbits. Crumpled and cross, he asks to go with his friend Albatross to the icy lands of the North Star. So off they fly, but when Moz gets lost he finds himself cold and lonely, and a long way from home. Full description

Noah the bunny feels "squished and squashed by the sleepy rabbits" in his burrow, so into the night he goes. An albatross takes him to the frozen North where he plays in the snow and then sleeps, splendidly alone, in an ice cave. But when he wakes up cold, all he wants is to be back in his burrow - will he be able to get home? Is there really any doubt? Chapman delivers one of her trademark adorable little animals endowed with a Disney-esque range of expressions. The icy-blue palette of the North stands in sharp and effective contrast to the cozy browns of the burrow in this mild flight of fancy. (Picture book. 3-6) (Kirkus Reviews)

Elizabeth Baguley studied English Literature before going on to train as a teacher. She began writing for children after discovering the power of picture books when reading to her daughters. She has also written Meggie Moon and The Little Lost Robin for Little Tiger Press. Jane Chapman shares a studio at her home in Dorset with her husband, illustrator Tim Warnes. They have two young sons. Jane has illustrated many best-selling books for Little Tiger Press.

Book Description Paperback. Condition: GOOD. Spine creases, wear to binding and pages from reading. May contain limited notes, underlining or highlighting that does affect the text. Possible ex library copy, will have the markings and stickers associated from the library. Accessories such as CD, codes, toys, may not be included. Seller Inventory # 3484082825

Book Description Paperback. Condition: Good. Connecting readers with great books since 1972. Used books may not include companion materials, some shelf wear, may contain highlighting/notes, may not include cdrom or access codes. Customer service is our top priority!. Seller Inventory # S_290409540

A Long Way From Home

Book Description Condition: very good. Gently used. May include previous owner's signature or bookplate on the front endpaper, sticker on back and/or remainder mark on text block. Expect delivery in 20 days. Seller Inventory # 9781845065652-3

Book Description Paperback. Condition: Used; Good. Dispatched, from the UK, within 48 hours of ordering. This book is in good condition but will show signs of previous ownership. Please expect some creasing to the spine and/or minor damage to the cover. Damaged cover. The cover of is slightly damaged for instance a torn or bent corner. Seller Inventory # CHL7277601

Book Description Condition: Very Good. This book is in very good condition and will be shipped within 24 hours of ordering. The cover may have some limited signs of wear but the pages are clean, intact and the spine remains undamaged. This book has clearly been well maintained and looked after thus far. Money back guarantee if you are not satisfied. See all our books here, order more than 1 book and get discounted shipping. . Seller Inventory # 7719-9781845065652

Book Description Condition: Very Good. Shipped within 24 hours from our UK warehouse. Clean, undamaged book with no damage to pages and minimal wear to the cover. Spine still tight, in very good condition. Remember if you are not happy, you are covered by our 100% money back guarantee. Seller Inventory # 6545-9781845065652

Book Description Condition: Good. Ships from the UK. Former library book; may include library markings. Used book that is in clean, average condition without any missing pages. Seller Inventory # 38270980-20