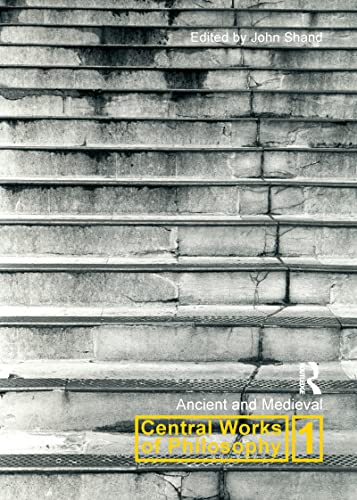 This collection of essays showcases the most important and influential philosophical works of the ancient and medieval period, roughly from 600 BC to AD 1600. Each chapter takes a particular work of philosophy and discusses its proponent, its content and central arguments. These are: Plato's Republic; Aristotle' Nichomachean Ethics; Lucretius' On the Nature of the Universe; Sextus Emperiicus' Outlines of Pyrrhonism; Plotinus' The Enneads; Augustine's City of God; Anselm's Proslogion; Aquinas' Summa Theologia; Duns Scotus' Ordinatio; William of Ockham's Summa Logicae .

"This is an outstanding collection of essays on famous philosophical works that have shaped western civilization. The authors are top specialists in their respective fields, and they present clear and exciting expositions of their subjects. This is a 'must-have' volume for any student of philosophy who wants an authoritative and accessible guide to these classics." - James Fieser, University of Tennessee, and editor of the Internet Encyclopedia of Philosophy

Central Works of Philosophy is a major multi-volume collection of essays on the core texts of the Western philosophical tradition. From Plato's Republic to Quine's Word and Object, the five volumes range over 2,500 years of philosophical writing covering the best, most representative, and most influential work of some of our greatest philosophers, each of them primary texts studied at undergraduate level. Each essay has been specially commissioned and provides an overview of the work, clear and authoritative exposition of its central ideas, and an assessment of the work's importance then and now. Each essay equips the reader with the resources and confidence to go on to read the works themselves. Together these books provide an unrivaled companion for studying and reading philosophy, one that introduces the reader to the masterpieces of the western philosophical canon and some of the greatest minds that have ever lived talking about the profoundest most exciting problems there are. Volume 1 gives readers a deep understanding of the contribution that the Ancient Greek and medieval philosophers have made to contemporary philosophical debate.

From Plato to William of Ockham, the philosophical texts covered in this volume offer a remarkable insight into a world out of which our present ways of thinking emerged and without which they cannot be fully understood. The volume begins with Plato's examination of justice and Aristotle's investigation of the good life. Lucretius is included as a remarkable attempt to fit man into the universe. Sextus Empiricus shows how we should respond to the possible limits of knowledge. Plotinus offers a remarkable vision of a world transcending the everyday. Augustine is the philosophical father of Christianity. Anselm offers a proof to a fool that God exists. Aquinas wrestles with the tension between what we may know naturally and what we know by revelation of God and the world. Duns Scotus meticulously explores detailed metaphysical problems of existence and identity, and Ockham develops a metaphysic through his brilliant logical theory.