Items related to Gangs of Britain: The Gripping True Stories of the...

Gangs of Britain: The Gripping True Stories of the Faces Who Run Britain's Organised Crime 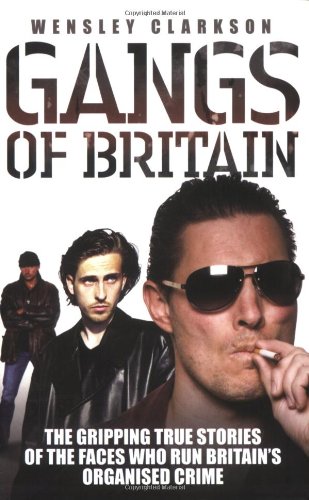 Today's gangsters are streets apart from the old-style gang lords of the Fifties and Sixties. The godfathers of old were seen by many as a stabilising influence. Their power inspired respect and they well and truly kept the underworld in check. The 21st century gangs of Britain are far more shady. Their brutality has spread far and wide and they live and thrive in our midst, on the streets and in suburbs where ordinary folk live. The creeping tentacles of crime have never stretched further.Organised crime is now worth more than GBP 10 billion in Britain every year. The old crimes of prostitution and extortion are being dropped in favour of multi-million pound drug deals, bringing gangsters more money and power than they've ever known. It is a cut-throat industry that is conducted in the shadows and driven solely by profit.Acclaimed true crime author Wensley Clarkson has met many of Britain's richest and most powerful gangs. In this fascinating and gripping account, he provides an extraordinary insight into these feared characters and takes us on a journey into the dark and glamorous underworld that seems to prove that, for many gangs, crime really does pay.This book reveals the activities of these gangs to the world, exposing such underworld legends as Kenneth Noye and the Adams family, who hold continuing fascination with lovers of true crime. Wensley Clarkson has a die-hard fan base that buys literally everything that he writes. His investigation leads to the shocking conclusion that crime is the third biggest industry in the UK, subsidising even legitimate businesses.

Wensley Clarkson is an investigative journalist who has written numerous non-fiction books, screenplays and television documentaries. His books have sold more than a million copies in seventeen countries worldwide.

1. Gangs of Britain: The Gripping True Stories of the Faces Who Run Britain's Organised Crime

2. Gangs of Britain: The Gripping True Stories of the Faces Who Run Britain's Organised Crime

3. Gangs of Britain: The Gripping True Stories of the Faces Who Run Britain's Organised Crime