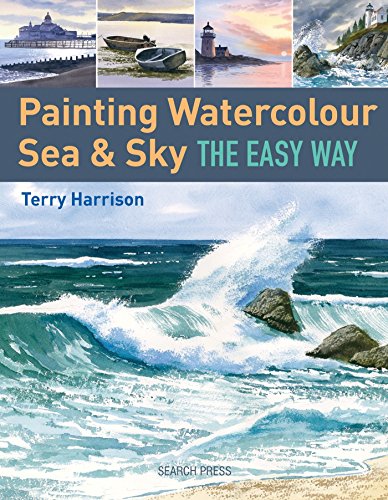 This book builds on the success of Terry Harrison's Sea & Sky in Watercolour, adding six new projects and plenty of new paintings. Terry's clear, no-nonsense advice takes the mystery out of painting clouds, clear skies, sunsets, foam bursts, breaking waves, rippled water, reflections, boats, cliffs, rocks, beaches and much more. There are plenty of tips and techniques to show how to use Terry's specially made brushes to paint watercolour seascapes the easy way. There are then nine beautiful step-by-step projects that show the techniques in action.

Above all, what you'll get is Terry's patient and easily-followed guidance. He's one of those people who knows the question you're going to ask before you've thought of it yourself and he's there with just the right advice and just the right illustration. --SAA Paint magazine

There s no easy way to paint, you know that, but there is an enjoyable and fulfilling way to learn that makes it seem easy. How do you find that? Follow Terry Harrison. You won t go wrong. --The Artist

Terry Harrison grew up in Norfolk, UK. His early art education was basic and he never dreamed that he would one day become an artist. At fifteen, Terry moved to Hampshire and, inspired by his brilliant art teacher, won a place at Farnham Art School at the age of sixteen. After graduating he became a graphic artist but continued to paint in his spare time. In 1984 Terry gave up his job to paint full time and never looked back, teaching and demonstrating his watercolour techniques throughout the world, developing his own range of brushes and paints and writing over 20 best-selling books that have been translated into many languages. Sadly, Terry passed away in 2017 but his legacy lives on. His gift for explaining his methods in an easy and accessible way has encouraged countless people to take up painting, and his beautiful works of art, inspired by the English countryside that he loved, will continue to be enjoyed by people all over the world.