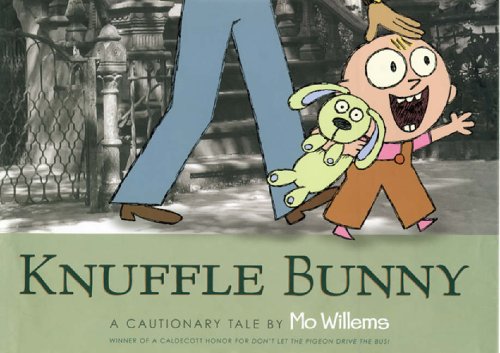 The first in the much-loved Knuffle Bunny series, join Trixie, her dad and her favourite stuffed bunny in this award-winning and brilliantly observed cautionary tale.

A Caldecott Honor book from the creator of Don't Let the Pigeon Drive the Bus and That Is Not a Good Idea!, this is the brilliantly true-to-life tale of what happens when Daddy's in charge and things go terribly, hilariously wrong. Merging expressive cartoon-esque illustrations with beautiful black-and-white photographs of New York, the visually striking story follows Daddy, Trixie and Knuffle Bunny on their trip to the neighbourhood Laundromat. But their adventure takes a dramatic turn when Trixie realizes somebunny's been left behind... And no matter how hard she tries to tell dad, he just doesn't understand!

Mo Willems is a three-time Caldecott Honor winner for Don't Let the Pigeon Drive the Bus!, Knuffle Bunny: A Cautionary Tale and Knuffle Bunny Too: A Case of Mistaken Identity. His celebrated Elephant & Piggie early-reader series has been awarded the Theodor Seuss Geisel Medal on two occasions as well as three Honors. Other favourites include Goldilocks and the Three Dinosaurs and That Is Not a Good Idea. Before he turned to children's books, Mo was a writer and animator on Sesame Street, where he won six Emmy Awards. Mo lives with his family in Paris, France. Find him online at www.mowillems.com and on twitter as @The_Pigeon.

Book Description Paperback. Condition: New. UK ed. Language: English. Brand new Book. Merging expressive cartoon network-esque illustrations with beautiful black and white photographs of Brooklyn, this funny story tells how Trixie and Knuffel Bunny's trip to the laundromat with Dad goes terribly wrong when Trixie realizes some bunny's been left behind.! Her attempts to alert Dad all the way home are unsuccessful, until Mum points out that Knuffel Bunny is missing and the family hotfoot it back to the laundromat. Fortunately, KB is safe, if a little wet. Seller Inventory # AA99781844280599