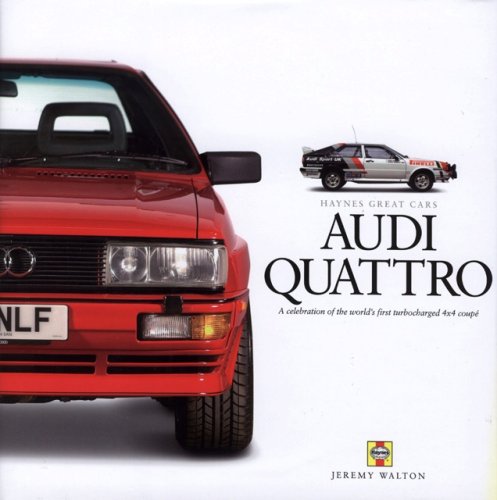 The Audi quattro is a design landmark. When the car first appeared in 1980 it caused a sensation. Audi's obsession with technical innovation resulted in a turbocharged four-wheel-drive machine that revolutionised rallying and took road car handling and grip to a new level. The quattro won on its rally debut, and went on to win four world titles. The quattro's rallying career ended in 1986 with the banning of Group B, although road car production continued, and more than 11,000 cars were built in total. This beautifully designed book tells the full road car and competition story.

Jeremy Walton has written many books and contributed to a wide range of magazines in his distinguished journalistic career. He has been a quattro enthusiast since the car's launch, and wrote extensively about the car when it was current. He lives near Warminster in Wiltshire.

Book Description Haynes Publishing Group P.L.C. Hardcover. Condition: Good. No Jacket. A copy that has been read, but remains in clean condition. All pages are intact, and the cover is intact. The spine may show signs of wear. Pages can include limited notes and highlighting, and the copy can include previous owner inscriptions. At ThriftBooks, our motto is: Read More, Spend Less. Seller Inventory # G1844253309I3N00