Items related to The Ten Thousand (The Macht, 1)

The Ten Thousand (The Macht, 1) 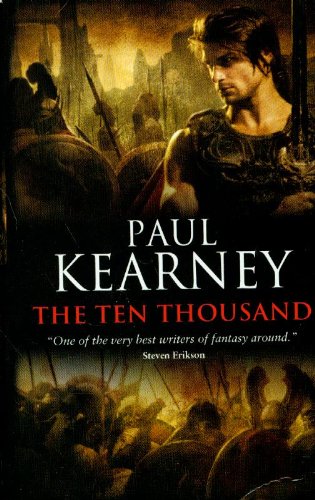 On the world of Kuf, the Macht are a mystery, a seldom-seen people of extraordinary ferocity and discipline whose prowess on the battlefield is the stuff of legend. For centuries they have remained within the remote fastnesses of the Harukush Mountains. In the world beyond, the teeming races and peoples of Kuf have been united within the bounds of the Asurian Empire, which rules the known world, and is invincible. The Great King of Asuria can call up whole nations to the battlefield. His word is law. But now the Great King's brother means to take the throne by force, and in order to do so he has sought out the legend. He hires ten thousand mercenary warriors of the Macht, and leads them into the heart of the Empire.

A bold, strong new voice in fantasy. - Robert Silverberg A terrific writer, one of the best working in epic fantasy. - SciFi.com

Paul Kearney was born in Northern Ireland. He studied Old Norse, Middle English and Anglo-Saxon at Oxford University, and subsequently lived for several years in both Denmark and the United States. At present he and his family live by the sea in County Down. www.paulkearneyonline.com