Items related to The Model Occupation: The Channel Islands Under German...

The Model Occupation: The Channel Islands Under German Rule, 1940-1945 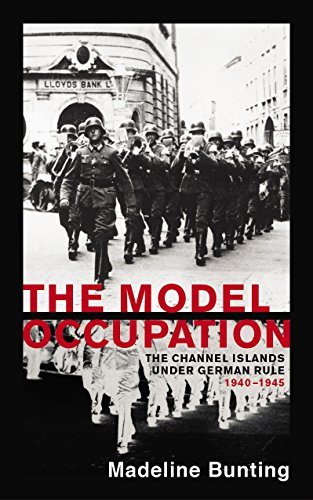 When the Germans arrived on the Channel Islands after the defeat of France in the summer of 1940, they and the islanders agreed that it would be a 'Model Occupation'. But as the war dragged on and Britain appeared to abandon the islands to their fate, so features of Nazi occupation already widespread throughout Europe emerged. There were love affairs between island women and German soldiers, betrayals and black marketeering, individual acts of resistance, feats of courage and endurance. Every islander was faced with uncomfortable choices: where did patriotism end and self-preservation begin? What moral obligation did they have to the thousands of emaciated and ill-treated slave labourers the Nazi's brought among them to build an impregnable ring of defences around the islands?

"Madeleine Bunting is a superb chronicler of what happened - if you want a classic example of the dilemmas of Resistance, here it is." (Professor Norman Stone The Times)

"I am full of admiration for this book. By careful research and sensitive use of light and shade, Ms Bunting holds the reader's attention through an uncomfortable passage in our history - and one which we have been most reluctant to inform ourselves" (Alan Clark Guardian)

"Excellently researched... This book...is an important historical document, if an uncomfortable one, in the understanding of our national character" (John Mortimer Sunday Times)

'Much the best book so far to appear on the German occupation of the Channel Islands' M. R. D. Foot, Times Literary Supplement