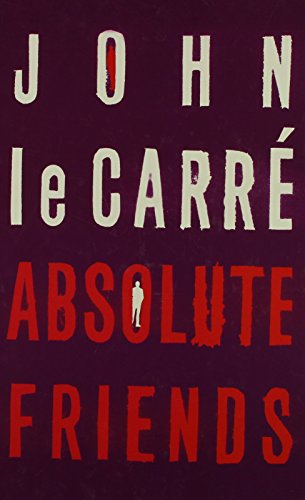 ABSOLUTE FRIENDS is a superbly paced novel spanning fifty-six years, a theatrical masterstroke of tragi-comic writing, and a savage fable of our times, almost of our hours.

The friends of the title are Ted Mundy, British soldier's son born 1947 in a shining new independent Pakistan, and Sasha, refugee son of an East German Lutheran pastor and his wife who have sought sanctuary in the West.

The two men meet first as students in riot-torn West Berlin of the late Sixties, again in the grimy looking-glass of Cold War espionage and, most terribly, in today's unipolar world of terror, counter-terror and the war of lies.

Deriving its scale from A PERFECT SPY and its passion from THE CONSTANT GARDENER, Le Carré's new novel presents us with magical writing, characters to delight, and a spellbinding story that enchants even as it challenges.

John le Carré's Absolute Friends is his best in years, capturing the verve and mastery of the magnificent early work. In fact, as a prelude to the book, you could do worse than reread The Spy Who Came in from the Cold again, and be forcibly reminded how le Carré transformed the spy thriller 40 or so years ago. And the consolidation of his achievement came with the George Smiley sequence (inaugurated with Tinker, Tailor, Soldier, Spy). As the Cold War came to an end, le Carré seemed to be in need of a new focus for his literary universe, but this was soon to come as the author explored newer social threats, with The Constant Gardener utilising the power of the pharmaceutical companies as nemesis, and producing yet another critical and popular success.

Absolute Friends, even before publication, had some of the best word of mouth any le Carré novel had enjoyed, and every word of it was justified. As a penetrating character study, it's nonpareil, with the (very different) friends of the title brilliantly realised.

Ted Mundy is the son of a British Infantry officer who left India under a cloud after partition, while Sasha is the crippled son of a religious German family who became a star of Far Left politics in the 1960s, at which point he encounters the ungainly Ted, taught by his father--and a committed girlfriend--to loathe British imperialism and all its current offshoots. In the present, Ted finds himself acting as an eccentric tour guide at Ludwig's palaces in Bavaria. When the two men meet again, they once more become involved in clandestine activities--with lethal results. If the author's own anti-Blair/Bush feelings are sometimes foregrounded, this is still le Carré at his considerable best, and a reminder of what a great talent the UK has in this writer. --Barry Forshaw

'This is vintage John le Carré.' (The Times)

'A literary master for a generation.' (The Observer)

'The master has not lost his touch ... one of his most enthralling creations.' (The Daily Telegraph)

Book Description Hardback. Condition: Good. The book has been read but remains in clean condition. All pages are intact and the cover is intact. Some minor wear to the spine. Seller Inventory # GOR002625346

Book Description Hardback. Condition: Very Good. The book has been read, but is in excellent condition. Pages are intact and not marred by notes or highlighting. The spine remains undamaged. Seller Inventory # GOR003464414