Items related to The White Tiger 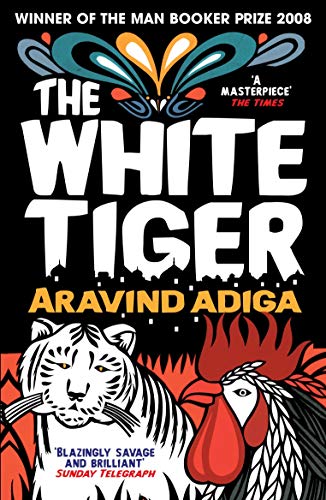 '[An] extraordinary and brilliant first novel... Adiga is a real writer - that is to say, someone who forges an original voice and vision.' Sunday Times

Meet Balram Halwai, the 'White Tiger': servant, philosopher, entrepreneur, murderer. Balram was born in a backwater village on the River Ganges, the son of a rickshaw-puller. He works in a teashop, crushing coal and wiping tables, but nurses a dream of escape. When he learns that a rich village landlord needs a chauffeur, he takes his opportunity, and is soon on his way to Delhi at the wheel of a Honda. Amid today's India's cockroaches and call-centres, its 36,000,004 gods, slums, shopping malls, and crippling traffic jams, Balram learns of a new morality at the heart of a new India. Driven by desire to better himself, he comes to see how the Tiger might escape his cage ... through murder.

Winning the Man Booker prize is something that most authors dream of, although -- ironically -- the reputation of the prize itself was under siege a few years ago. Books that won the award were acquiring a reputation of being difficult and inaccessible, but those days appear to be over -- and unarguable proof may be found in the 2008 winner, The White Tiger by Aravind Adiga. Apart from its considerable literary merit, the novel is the most compelling of pageturners (in the old-fashioned sense of that phrase) and offers a picture of modern India that is as evocative as it is unflattering. The protagonist, too, is drawn in the most masterly of fashion.

Balram Halwai, the eponymous ‘white tiger’, is a diminutive, overweight ex-teashop worker who now earns his living as a chauffeur. But this is only one side of his protean personality; he deals in confidence scams, over-ambitious business promotions (built on the shakiest of foundations) and enjoys approaching life with a philosophical turn of mind. But is Balram also a murderer? We learn the answer as we devour these 500 odd pages. Born into an impoverished family, Balram is removed from school by his parents in order to earn money in a thankless job: shop employee. He is forced into banal, mind-numbing work. But Balram dreams of escaping -- and a chance arises when a well-heeled village landlord takes him on as a chauffeur for his son (although the duties involve transporting the latter's wife and two Pomeranian dogs). From the rich new perspective offered to him in this more interesting job, Balram discovers New Delhi, and a vision of the city changes his life forever. His learning curve is very steep, and he quickly comes to believe that the way to the top is by the most expedient means. And if that involves committing the odd crime of violence, he persuades himself that this is what successful people must do.

The story of the amoral protagonist at the centre of this fascinating narrative is, of course, what keeps the reader comprehensively gripped, but perhaps the real achievement of the book is in its picture of two Indias: the bleak, soul-destroying poverty of village life and the glittering prizes to be found in the big city. The book cleverly avoids fulfilling any of the expectations a potential reader might have -- except that of instructing and entertaining. The White Tiger will have many readers anxious to see what Adiga will do next. --Barry Forshaw

A masterpiece Source: The Times

Dazzling... With The White Tiger, Adiga sets out to show us a part of [India] that we hear about infrequently: its underbelly... [Balram's voice is] brimming with idiosyncrasy, sarcastic, cunning. Source: Independent on Sunday

Adiga's portrait of the Indian capital is very funny but unmistakably angry... Keeps you guessing to the final page and beyond. Source: Financial Times