Items related to Killing Pablo: The Hunt for the Richest, Most Powerful...

Bowden, Mark Killing Pablo: The Hunt for the Richest, Most Powerful Criminal in History

Killing Pablo: The Hunt for the Richest, Most Powerful Criminal in History 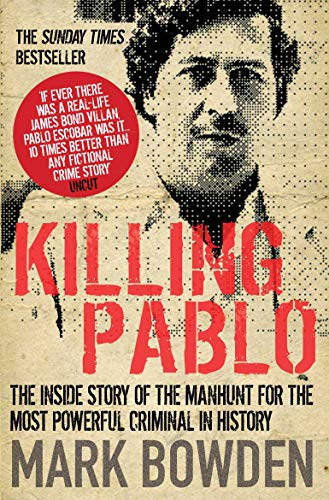 'Killing Pablo' tells the story of how American Special Forces hunted down and assassinated the head of the world's biggest cocaine cartel.

Killing Pablo, Mark Bowden's intoxicating account of the turbulent life of Colombian drug baron Pablo Escobar and his inevitable demise, relates in riveting detail the cataclysmic effect one man can have on the world economy. Finally tracked down and killed in 1992 after a 15-month intense manhunt that had resulted in hundreds of casualties on both sides, Escobar was, ironically, that archetypal American hero, the outlaw, siding with "ordinary people" against the ruling oligarchy (although at his peak Forbes magazine listed him as the seventh-richest person in the world). His break came when the American drug of choice changed from dope to cocaine, a golden, or perhaps powdered, egg exploited by Escobar with resourceful manipulation of officials and politicians--he would offer the classic choice of his silver or his lead. Even when incarcerated at La Catedral prison on a smuggling charge, he turned it into a state within a state. The guards, the army and the police all fell within his pay and he led his operation with a quiet, well-mannered ruthlessness. Until, that is, the Americans took an interest.

Bowden is well-equipped to describe the drawn-out campaign by the intelligence services to assassinate Escobar, having already covered similar territory in the superb Black Hawk Down, which chronicled the disastrous 1993 American operation in Mogadishu. His descriptions of the electronic surveillance that finally ensnared the hounded Don and the shady mutual interests of civilian militia group Los Pepes, the Colombian government forces and the US Delta unit that wore him down, are taut, dramatic and deeply thrilling. While he stops short of claiming that the Americans were present or active in the killing, he admits that Delta knew roughly where Escobar was and were dismissive of the electronic wizardry, pointing out that Escobar was eventually spotted by the naked eye. Though Escobar died, the circumstances he seized upon would be harder to expunge. The troubling, concluding lines of Brecht's The Resistible Rise of Arturo Ui come to mind, referring to a character based on Al Capone and Hitler but who could have been Escobar, "The bastard son is dead but the bitch is still on heat". --David Vincent

A remarkable opus of investigative journalism --The Times

1. Killing Pablo: The Hunt for the Richest, Most Powerful Criminal in History