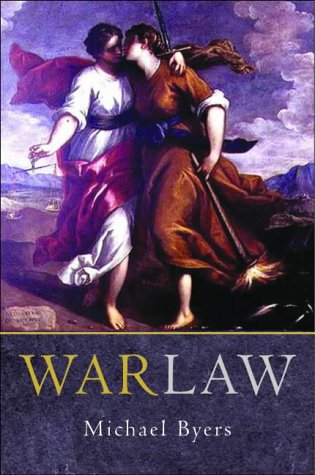 The international rules and institutions governing the use of military force are under unprecedented scrutiny, following the removal of Slobodan Milosevic and Saddam Hussein in wars that were not sanctioned by the UN. Michael Byer's highly accessible book addresses seven broad issues: sanctions; peacekeeping; military force authorized by the UN; self-defence; UN authorized humanitarian intervention; unilateral humanitarian intervention; and the laws applicable during armed conflict ('international humanitarian law'). These issues are examined through a series of real conflicts, starting with the 1837 Caroline Incident and ending with the 2003 Iraq war. The final chapter focuses on international humanitarian law, and ranges from the 1859 Battle of Solferino to the Iraq war. War Law is neither a textbook nor a treatise, but rather an informative and stimulating read for the educated and intellectually curious non-specialist about what has always been a highly divisive issue.

‘Should be read, and pondered, by those who are seriously concerned with the legacy we will leave to future generations.’ -- Noam Chomsky

Michael Byers holds the Canada Research Chair in Global Politics and International Law at the University of British Columbia in Vancouver, where he also serves as Academic Director of the Liu Institute for Global Issues. He is the author of Custom, Power and the Power of Rules (1999), the editor of The Role of Law in International Politics (Oxford University Press, 2000), and the co-editor of United States Hegemony and the Foundations of International Law (Cambridge University Press, 2003). He is a regular contributor to the London Review of Books. Atlantic Books published War Law in 2005.

Book Description Paperback. Condition: Very Good. The book has been read, but is in excellent condition. Pages are intact and not marred by notes or highlighting. The spine remains undamaged. Seller Inventory # GOR005643972