Items related to WAR AT SEA 1939-45: Volume I The DefensiveOFFICIAL... 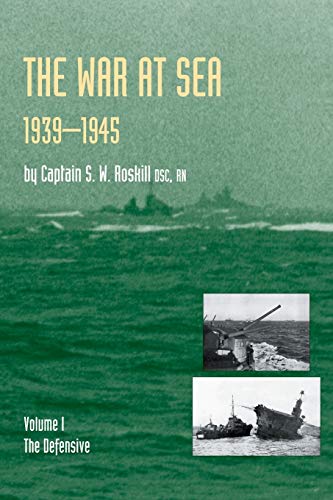 Vol Part 2 originally published in 1961. This volume is the official account which covers the period from 1st June 1944 until the end of the war.Captain Roskill has long been recognised as the leading authority on The Royal Navy s part in the Second World War. His official History (originally published for the HMSO) is unlikely even to be superceded. His narrative is highly readable and the analysis is clear. Roskill describes sea battles, convoy actions and the contribution made by technology in the shape of Asdic & Radar. Contents: Chronological Summary of Prncipal Events; Prelude to Neptune -The Assault on Normandy 6th June-3rd July 1944-The Mediterranean Campaigns 1st June-31st December 1944-Coastal Warfare 4th July-31st December 1944-Home Waters and the Arctic 1st June-31st December 1944-The Battle of the Atlantic 1st June-31st December 1944-The Indian Ocean and Pacific 1st June-31st December 1944-The End of the Mediterranean Campaigns 1st Janujary -8th May 1945-Home Waters and the Arctic 1st January-8th May 1945; The Climax of the Anti-Shipping Offensive-The Battle of the Atlantic The Final Phase and the Surrender of the U-Boats 1st January-8th May 1945-The Offensive in the Indian Ocean 1st January-30th June 1945-The Pacific War and the Arrival of the British Pacific Fleet 1st January-31st March 1945-The Offensive in the Pacific1stApril-30thJune1945-The Setting of the Rising Sun 1st July-14th August 1945-Conclusion and Inquiry.

6. WAR AT SEA 1939-45: Volume I The DefensiveOFFICIAL HISTORY OF THE SECOND WORLD WAR.