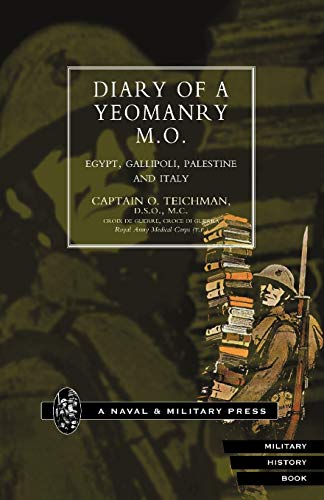 The author, a Territorial medical officer in the RAMC, was attached to the Worcestershire Yeomanry (Queen’s Own Worcestershire Hussars) in 1914. The regiment was part of the 1st South Midland Brigade, 1st Mounted Division, but within a month of the outbreak of war a 2nd Mounted Division was formed and the 1st S Midland Brigade joined it. In April 1915 the division went to Egypt and in May the brigades were numbered as Mounted Brigades with 1st S Midland becoming 1st Mounted Brigade. In August 1915 the division was ordered to proceed, dismounted, to Gallipoli and Teichman went with his regiment and into action. The division suffered heavy losses at Scimitar Hill (21 Aug) and this attack is described in some detail. A week later, on Chocolate Hill, Suvla, he was wounded by shrapnel and evacuated home. In one entry he describes how a large packet of maps (in very short supply) delivered to brigade HQ turned out to be maps of Cromer, Sheringham and King’s Lynn districts where they had been stationed in 1914. He rejoined his regiment at Mudros in early November from where they returned to Egypt to the Canal zone, but at christmas Teichman went down with enteric fever and was again evacuated to the UK. By May he was back at duty (his brigade had been renumbered 5th) and during operations in the Sinai Desert was again wounded, at the battle of Qatia (5 Aug 1916) which kept him out of action till the end of October. The diarist takes us through the rest of the Sinai campaign and, in March 1917, into Palestine, first with Murray (battles of Gaza) and then, from June 1917, with Allenby, fighting as part of the Australian Mounted Division. At Huj, on 8 November, he rode close behind his regiment as it took part in a charge against some 2,000 Turkish infantry who were protecting guns manned by Austrians and Germans; the infantry retreated and the guns were taken. The marvellous descriptions of living and fighting in the desert include an incident involving a ten foot black mamba and attempts to kill it using chloroform (corps HQ had asked for dead but undamaged snakes for antidotes to snakebites). He left the Middle East in June 1918 for leave in the UK after which he was posted to Italy where he joined 22nd Brigade (7th Division) in October for the last month of the war.'Teichman ended the war with a DSO, MC, Croix de Guerre, Croci di Guerra and three mentions in despatches. This is a well-written book by one who knows his military history - a most informative account of war in the desert.

Diary of a Yeomanry MO: Egypt, Gallipoli - Palestine and Italy