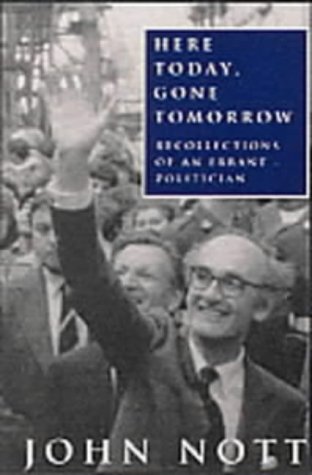 The autobiography of former Defence Secretary Sir John Nott. Nott entered Parliament in 1966 after a career in the City. He became one of Margaret Thatcher's chief lieutenants and was appointed Trade Secretary in her first Cabinet. In 1981 he moved across to Defence where he implemented a wide ranging Defence Review. He was Defence Secretary in the Falklands War Cabinet but left Parliament at the 1983 election. He went on to become chairman of Lazard Brothers and Hillsdown Holdings. He now farms in Cornwall.

"It is the awkward passion not the mellow recollection which renders this an outstanding autobiography. There is much here that historians will prize." -- Sunday Telegraph - Matthew Parris

"Who would have thought that John Nott had some much of interest to tell us?" -- Daily Mirror - Paul Routledge

It is the style and its candour that makes this book an excellent read. -- John Biffen, The Spectator

Nott has composed one of the best memoirs of the era; it is likely to become an essential source for future historians of that period. -- Simon Heffer, Literary Review

What makes the book remarkably entertaining and readable is Nott's spiky intelligence and candour. -- Norman Lamont, Mail on Sunday

My book is not a conventional political autobiography, it is more the story of a varied life starting when I walked out of an interview with Robin Day (hence the title of the book), going through a career in the City, army service in the jungles of Malaya with the Gurkhas and then most important of all my experience as a member of Margaret Thatcher's war cabinet throughout the Falklands war. I think this is the first insider's account of the decisions and tensions arising in what must have been Great Britain's last colonial war.