McNish, Cliff The Scent of Magic (Book 2 of The Doomspell Trilogy)

The Scent of Magic (Book 2 of The Doomspell Trilogy) 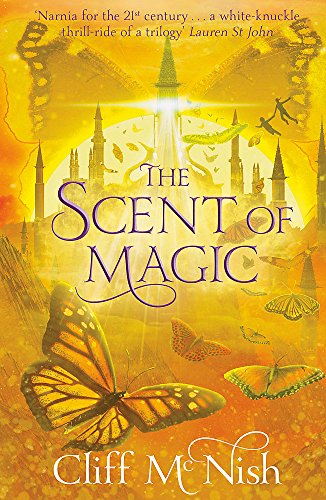 All over the world children are discovering they have magical powers - as Rachel did when she was abducted by the Witch Dragwena in THE DOOMSPELL. But the reason is that the evil Witches of the planet Ool are determined to avenge Dragwena's death by manipulating an army of children and fighting the good Wizards. Rachel's own powers, and the ability of her younger brother Eric to unmake magic, are tested to the full in a thrilling story in which she has to confront another child as strong as she is herself.

McNish tells a rattling good tale, and his well-plotted narrative races through some excellent twists and turns to a spectacular climax. (THE DAILY TELEGRAPH)

The language used is rich and evocative, full of visual and sensory imagery it captures the readers interest and imagination from the beginning and holds it with ease to the end. (SCHOOL LIBRARIAN)

Anyone who enjoyed The Doomspell will want to follow it up with The Scent of Magic, in which the battle between the Witches and Earth's children moves onto our planet. (THE TIMES)

The Scent of Magic continues The Doomspell story, but if anything the characterisations are deeper, the plot even more intriguing, and it is all carried off with a verve, pace and sheer passion for pure storytelling that make McNish's novels so compulsive. (AMAZON)

It is a spellbinding read full of excitement and suspense. A brilliant sequel to The Doomspell. (COOL READS)

Rachel and Eric continue their battle against the evil witch, Dragwena, in the second volume of Cliff McNish's bestselling debut trilogy, now repackaged for a new generation.

1. The Scent of Magic - Book 2 of the Doomspell Trilogy