Items related to HAND I PLAYED, THE

David Spanier HAND I PLAYED, THE

HAND I PLAYED, THE 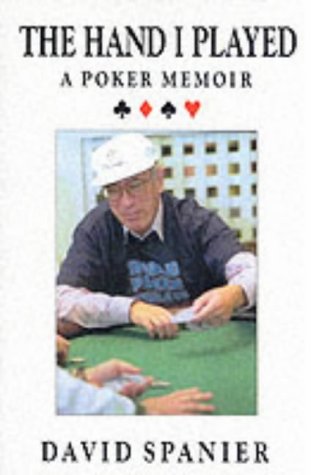 Paperback edition of the outstanding autobiography of the late David Spanier, the well-known journalist, author and poker player who died in April last year. A wonderful mix of straight autobiography refracted through the author's lifelong love of the game of poker.

Spanier captures the language and flavor of the wild and often colorful world of gambling poker in particular. His lively, entertaining stories written by a man who knew the best, the classiest, and some of the most talented, sometimes bizarre members of the gambling fraternity offers insights into high stakes play, Las Vegas and world-class action. Howard Schwartz, Gamblers Book Shop, Las Vegas"

Many of the greats of poker are long gone. Ungar, Strauss and even Spanier are names of the past. But what lasts forever are the memories of big hands won and lost. They are never forgotten, those brief moments of splendid victory sandwiched between so many slices of rancid defeat served up by a scowling Lady Luck with snakes in her hair. That is why the game endures. Bob Shemeligian, Las Vegas Mercury, July 2001"

David Spanier, was one of the world's foremost writers on poker and gambling. His many books includedWelcome to the Pleasuredome, Inside the Gambler's Mind, andTotal Poker. Spanier became the world's first poker columnist of a national newspaper when he started a weekly column forThe Independent. Spanier also had a long, distinguished career as a diplomatic journalist atThe Timesand in radio. He died in 2000."

The Hand I Played (Paperback)

Book Description Paperback. Condition: New. Language: English. Brand new Book. The gambling writer and journalist David Spanier looks back at his life-long love of poker in this compelling memoir. Spanier takes us from teenage days spent playing the horses to the elegant casinos of Mayfair and Monte Carlo, from the legendary Tuesday night game in north London to Las Vegas. Primarily a collection and development of articles that Spanier produced for various publications, (although many pieces appear in this book for the first time), Spanier begins with an account of his early life that led to his fascination with gambling then moves on to consider the appeal of gambling to human beings as a species. He goes on to cover his time on a Caribbean poker cruise, give his thoughts on internet poker, Las Vegas in literature, discusses Texas 'Holdem for beginners and recounts his experiences in the $10,000 No Limit Hold'em tournament at the World Series of Poker. Seller Inventory # AAT9781842430392

HAND I PLAYED, THE: A Poker Memoir

The Hand I Played

The Hand I Played

HAND I PLAYED, THE: A Poker Memoir